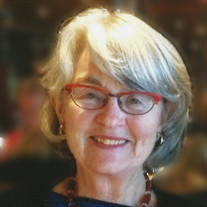 Linda Evelyne Alford of Asheville died February 21, 2017, at the John F. Keever, Jr. Solace Center. She was born June 16, 1941, in Winston-Salem to the Rev. T. Sloane Guy, Jr., and Anne Haynes Guy. Linda was an independent spirit. She was arrested for trespassing in 1960, along with 21 other students from Wake Forest College and Winston-Salem Teachers College, during a sit-in at a Woolworth lunch counter. The demonstration led to the desegregation of local businesses in Winston-Salem, and a historical marker near the site describes it as “the first sit-in victory in North Carolina.” The following year she dropped out of Wake Forest to marry the editor of the college newspaper, John Alexander Alford, and moved with him to Oklahoma, where she completed her undergraduate studies at the University of Oklahoma. In 1964, with their two-year-old son in tow, the young couple spent a vagabond year in Europe, starting in Paris and ending up in Istanbul. It was the beginning of a life-long passion for travel, and over the next 50 years the couple visited nearly 50 countries. Among Linda’s favorite memories was a hot-air balloon ride over the Valley of the Kings in Egypt. She was herself a licensed glider pilot. She loved learning, and was strongly committed to public education. While John studied for his doctorate in medieval literature and language at the University of North Carolina, Linda earned an M.A. in art history. Several years later, while simultaneously teaching high school math in Haslett, Michigan, she obtained an MBA from Michigan State University, and completed the coursework for a PhD in business. She left the classroom in 1985 to join the Institute for Research on Teaching at Michigan State University. In 1990 she took a position with the Michigan Partnership for New Education at MSU, and from 1993 to 1995 served as the head of its Educational Extension Service. After retiring to Asheville in 1995, Linda spent more time on the enthusiasms she had put on hold during her professional career, especially music and gardening. She was on the board of the Asheville Community Concert Association (later Asheville Bravo Concerts), and from 2001 to 2003 served as its President. She also worked as a board member with the Asheville Area Center for the Performing Arts to raise funds for a new performance center in Asheville. She derived the greatest pleasure, however, from gardening, and gave numerous talks on garden design to the Rotary Club, the Osher Lifelong Learning Institute through UNCA, and at regional gatherings of Master Gardeners. Her own nearly five-acre garden was included in the first ever Buncombe County Master Gardener garden tour in 2007. In 2016 she was named Buncombe County Extension Master Gardener Volunteer of the Year. She was preceded in death by her parents, and by her younger brother, Thomas Sloane Guy III of Sparta. Survivors include her husband John; their son John Alexander Alford, Jr. of Asheville; their daughter, Nana Katherine Noel of Loveland, Ohio; four grandchildren; and a sister, Christy Ann Crochet of Cheyenne Wyoming. Linda requested there be no organized service, but friends are invited to join the family in April to dedicate a bench in her memory at the North Carolina Arboretum.

Linda Evelyne Alford of Asheville died February 21, 2017, at the John F. Keever, Jr. Solace Center. She was born June 16, 1941, in Winston-Salem to the Rev. T. Sloane Guy, Jr., and Anne Haynes Guy. Linda was an independent spirit. She was... View Obituary & Service Information

The family of Linda Evelyne Alford created this Life Tributes page to make it easy to share your memories.