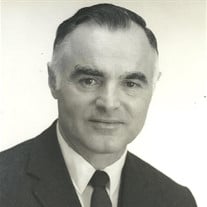 Lino Della-Bianca, 93, passed into eternal life to be with his Lord Jesus Christ on Saturday, March 25, 2017, The Feast of the Annunciation. He was a great man. Lino was born in Coshocton, Ohio, on January 31, 1924, to Angela Lisena Fantin Mallatia and Venanzio Della-Bianca. He was an excellent marksman. While still in high school in Akron, he won the shooting trophy of the Junior American Legion three years in a row and the Ohio State Junior Championship- indoor and outdoor. He also won the Midwest Metallic Sight Championship and the Firestone Trophy. While attending the University of Akron, his shooting team placed first in the Pershing Rifle National Championship with Lino in the lead. He also won the Pershing Individual National Championship. He was a veteran of World War II, 274th Infantry Regiment, 70th Infantry Division- The Trailblazers. Lino lead a major battle in the Alsace-Lorraine area of France which was instrumental in helping end the war. He saved the lives of two officers. Because of his superior leadership and heroism, he was awarded the Bronze Star and Purple Heart plus numerous other awards. His battalion received a “Presidential Unit Citation” for outstanding performance in combat. He remained in Austria as head of a prisoner of war camp in Golling an der Salzach, Land Salzburg. It was here that he met his beautiful wife of 63 years, Maria Theresia Schieferer. They moved back to America and married in the Church of the Annunciation in Akron, Ohio, on August 16, 1947. Lino completed a Bachelors Degree at the University of Akron and a Masters Degree in Forestry at Michigan State. He became an accomplished Silviculturist for the U.S. Forest Service and helped begin the Bent Creek Forest Experimental Station in Asheville, doing much research in Bent Creek, on the Blue Ridge Parkway, and in the Piedmont. Lino was a successful writer whose articles have appeared in many Silvics books and periodicals such as the “Journal of Forestry” and the “Journal of Wildlife Management.” His articles and teachings are often used in forestry schools across the country. He co-authored the book, YELLOW-POPLAR: CHARACTERISTICS AND MANAGEMENT, which remains the premier research book on yellow poplars, and is listed in the Library of Congress. Lino was a lifelong member of the holy Roman Catholic Church and a 3rd Degree member of the Knights of Columbus. He was also an accomplished mountain climber, summiting the Grossglockner, the highest mountain in the Austrian Alps, and the Moench and Matterhorn (did not summit because of a storm) in Switzerland, as well as many others. Lino was an avid outdoorsman and enjoyed traveling, reading, and spending time with his family. He is survived by his sister, Liliana Shockey, of Green, OH; five children- Johanna Maria Brooks (Michael) of Eureka, MT, Brian Della-Bianca of Asheville, Elizabeth Anne Allen (James) of Woodbridge, VA, Michele Akin of Southern Pines, NC, and Lisena Maria Moss (Johnny) of Asheville; six grandchildren- Lisena Maria Brown, Robert Carlin and Joseph Patrick Allen, Jeremy Wyatt and Jesse Rae Akin, and Dane Alexander Adams; three grandchildren by marriage- DeLane Edward Moss, Janet Lynn (Moss) Wilson, and Brandon Paris; four great-grandchildren and two great-great grandchildren. The Holy Sacrifice of the Mass will be celebrated in his honor at the Basilica of Saint Lawrence, D.M. in Asheville at 2 p.m. on Thursday April 20, 2017. Graveside services will be held following the Mass at Lewis Memorial Park in Beaverdam with military honors.

Lino Della-Bianca, 93, passed into eternal life to be with his Lord Jesus Christ on Saturday, March 25, 2017, The Feast of the Annunciation. He was a great man. Lino was born in Coshocton, Ohio, on January 31, 1924, to Angela Lisena Fantin... View Obituary & Service Information

The family of Lino Della-Bianca created this Life Tributes page to make it easy to share your memories.

Lino Della-Bianca, 93, passed into eternal life to be with his...

Send flowers to the Della-Bianca family.