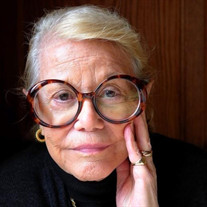 Lois D. Smith, 91, resident of Crowfields in Asheville, NC died peacefully at home after a short COVID related illness. Lois lived life with a valiant resilience, full of grace, humor, optimism and an engaging love for others. She had the unique ability to enliven a room with song, witty stories and anecdotes. Daughter of Louis Peter Daniels of Patmos, Greece and Alice Roosevelt Kugle of Stirling, Illinois, Lois was born in Whiteside County, Illinois in January 1929. Trained in classical voice from an early age, Lois received the Chicago Tribune’s award and full scholarship to continue formal study in voice. With the on-set of polio in 1948, her promising career was side-tracked. After time in an iron lung, she headed to Florida to recuperate. There she met and married her first love, the young Robert (Sonny) Lee who became a visionary leader in Florida. Together, they were active and founding members of numerous local and state clubs and organizations. Lois was proud to be a delegate at the 1968 Democratic Convention in Chicago. She was also an honorary Sheriff’s Deputy in Fort Myers and helped apprehend an armed escaped felon. Tragically widowed in 1968, Lois later married David J. McCreery of Miami Beach, Winter Park and Fort Myers, FL. In 1973 the couple moved to the small mountain village of Cashiers, NC. There she became an active member in the community where she contributed to many causes. The Cashiers Rescue Squad, the volunteer Fire Department and their members held special places in her heart. After the sudden death of David, Lois split her time between Cashiers, Winter Park and Belgravia, London. She loved her many friends and surrogate children. In 1989, retired British/Australian businessman Harry Smith strolled into her life and heart. Married in 1990, the two divided their time between Melbourne, Australia and High Hampton in Cashiers. After Harry’s unexpected death in 1996, Lois returned to her London flat and Cashiers. Years later in London she met Claudio Capasso, a retired international executive known for his keen wit, fun-loving humor and European charm. While living in London, Cashiers and Asheville, the couple traveled extensively enjoying close friendships around the world. Throughout her long life, Lois was an active participant in each of the communities where she lived. She was the only woman to serve on the founding board of directors of the Cashiers Carolina Mountain Bank. She helped establish the Atlantic Center for the Arts in Florida and served on its founding board of directors. Over the years, she enjoyed memberships at the Chattooga Club, Cedar Creek Racquet Club, Sapphire Valley Country Club and High Hampton Colony Club of Cashiers; the Ocean Reef Club, Jockey Club and Royal Palm Yacht Club of Florida, the Biltmore Forest Country Club of Asheville, the Sloane Club and Mossiman’s Club of London, and the infamous CRS (Can’t Remember Shit) Poker Club of Cashiers. Lois was preceded in death by her eldest sister, Navy Commander Marvelle Daniels and her eldest daughter, Rossie Lee. She is survived by her loving sister, Stephanie Daniels of Tallahassee, FL, numerous nieces and cousins, and her daughter and best friend Alison Lee of Cashiers. In lieu of flowers, donations may be made to the Cashiers Valley Rescue Squad, Cashiers Fire Department in Cashiers, NC or Atlantic Center for the Arts in New Smyrna Beach, FL. A celebration of her life will be held at a later date.

Lois D. Smith, 91, resident of Crowfields in Asheville, NC died peacefully at home after a short COVID related illness. Lois lived life with a valiant resilience, full of grace, humor, optimism and an engaging love for others. She had the... View Obituary & Service Information

The family of Lois D. Smith created this Life Tributes page to make it easy to share your memories.