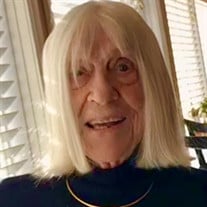 Unstoppable. Until three forms of cancer, and the advancing march of time finally laid Lorraine Formato to rest at 93, this is how many who knew Lorraine would describe her. Born in rural Stokes County, NC in 1927, Lorraine Formato was the fourth of ten children born and raised on a working tobacco farm. Tall, blonde and good looking, Lorraine was much different than one would assume. Before marrying she lived in Winston-Salem where she worked as a model and for Southern Bell. Lorraine was the Executive Vice President of Professional Sales Associates, a leading sales consultancy, operating in the mid Atlantic. As a founding company officer, Lorraine was an invited guest speaker for Women in Business at UNCA. Lorraine was also a master artist, with her work purchased by several banks and collectors for the their permanent collections. She was one of the Founders of “The Muses”, which became The Asheville Art Museum. Lorraine received The Women of the Year Award from Asheville’s Altrusa Club for her volunteer work for Women in Prison. In the second act of her life took acting classes and spent a summer performing in "Trojan Women" with the Montford Park Players and "A Christmas Carol” at the Diane Wortham Theatre. Strong and brave, in her 70’s, Lorraine spent a summer in France studying the master impressionists. An accomplished artist in her own right, her paintings were auctioned to raise money for the museum and her early support of the River Arts District lead her Odyssey Studio where she discovered her love of building pottery. Upon retirement, Lorraine became a private investor managing her own real estate portfolio and in 2 states, becoming an original owner in Beaverdam Run, which featured here for years in their advertising campaign. To those who knew her, Lorraine was fashionably elegant, good natured, very giving, funny and fiercely loyal to her family. Despite being a world traveler, she was the type of person with the country sensibility to always see the good in any situation. Lorraine was preceded in death by her husband, Dick Formato. and beloved son Larry Ray Formato; her brothers, Paul Ray, Fred Ray and Spotswood Ray; sisters Laura Tufts and Ruth Stephens. Lorraine is survived by her daughter, Dori Formato Legg and husband Howard Overshown of New York, NY; son, Richard Formato and wife Lori Formato; granddaughter, Lily Formato and grandson, Jack Formato of Wytheville, VA; brother, Jack Ray of Corpus Christi,Texas; sisters, Rachael Gray of Lawsonville, NC., Ann Mooney of Hendersonville, NC., and Dorothy Lackey of Tacoma, WA. In her last years, she was the type of Mother and Grandma where everyone would sit around her kitchen table talking about all the good times. In her final days, she would say, "I don’t like dying, but I am so grateful, so proud of my family and my life… it has been so wonderful.” Lorraine was a faithful member of Grace Covenant Presbyterian Church for 61 years. Memorials may be made to Grace Church, 789 Merrimon Ave, Asheville, NC 28804 or the Asheville Art Museum, 2 S Pack Square, Asheville,NC 28801. Her family will invite friends and family to celebrate her life at a later date, when everyone feels safe to join us.

Unstoppable. Until three forms of cancer, and the advancing march of time finally laid Lorraine Formato to rest at 93, this is how many who knew Lorraine would describe her. Born in rural Stokes County, NC in 1927, Lorraine Formato was the... View Obituary & Service Information

The family of Lorraine Angelita Ray Formato created this Life Tributes page to make it easy to share your memories.

Unstoppable. Until three forms of cancer, and the advancing march...

Send flowers to the Formato family.