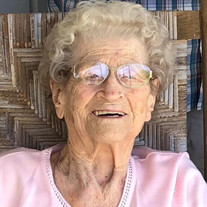 Louise (Robinson) Dodge, formerly of Asheville, NC, resident, passed away September 28, 2021, after battling several illnesses. Peggy was born on June 3, 1920. She was 101 years of age. Known to most of her friends and family as Peggy, she was born and raised in East Concord, New Hampshire. She had lived in Asheville in the Beaverdam area for more than 40 years. She was married to Ray B. Dodge Jr. for more than 58 years who predeceased her. Peggy has been living with her daughter, Carol (Dodge) Romine’s in New Market, TN., since 2013. She was a member of Beaverdam Baptist Church. Peggy is survived by her three children, Rev. Richard E. Dodge, and his wife, Joy, of Flowery Branch, GA; Carol D. Romines, and her husband, Gary, of New Market, TN; and David E. Dodge and his wife, Melody, of Candler, NC. She also is survived by six grandchildren: Captain Bryan Dodge, U.S. Army, Rev. Jeffrey Dodge, Jocelyn R. Rimmer, and Stephen Romines, Stephanie Dodge and Cody Dodge; twelve great-grandchildren: Thatcher and Henry Dodge, Matt and Madelyn Romines, Drew and Scarlet Rimmer, Carolina Smalling, and Caiden, Elijah, Kyran, Eden, and Ezekiel Dodge; one sister, Avis Robinson, of Flowery Branch, GA. In addition to her husband, Ray, Peggy was preceded in death by her brother, Elton Robinson, and her sister, Lilly Mattice. The family will receive friends from 2:30 until 3:20 pm, Saturday, October 2, at Morris Funeral and Cremation Care, 304 Merrimon Avenue, Asheville, NC 28801. Peggy’s Funeral Service will be held at 3:30 p.m. in the Chapel of Morris Funeral and Cremation Care. Graveside service will immediately at Lewis Memorial Park, 415 Beaverdam Road, Asheville, NC. Rev. James Lamb will officiate the service. Condolences may be sent to the family at www.morrisfamilycare.com.

Louise (Robinson) Dodge, formerly of Asheville, NC, resident, passed away September 28, 2021, after battling several illnesses. Peggy was born on June 3, 1920. She was 101 years of age. Known to most of her friends and family as Peggy, she... View Obituary & Service Information

The family of Louise "Peggy" Dodge created this Life Tributes page to make it easy to share your memories.

Send flowers to the Dodge family.