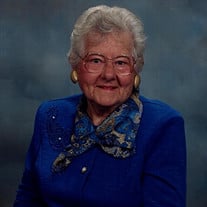 Louise Straehla Sawyer passed away September 11, 2016. She was born in Jacksonville, Florida on October 10, 1921 to Charles Straehla and Virginia Murdock Straehla. She came to Asheville as a young teenager. She graduated from Grace High School where she played basketball, participated in the drum and bugle corps and was on the yearbook staff. She later married Edward M. Sawyer. They had three daughters Eddean, Elaine and Diann. She was devoted to her family and loved them dearly. She sewed clothes for her girls all through the years and made a quilt for each grandchild. She began her working life at Mills Manufacturing Company making parachutes. She then worked at the soda fountain at Lord’s Drug Store on Merrimon Avenue. Later she began working at the S & H Green Stamp Redemption Center where she retired after more than 25 years of service. When she was in her 80’s she worked at Clark’s Printing for a few years. She enjoyed music, growing flowers, tap dancing, quilting, sewing, knitting, and traveling. When she heard you rattle the car keys she was ready to go. She loved traveling with her friends to many varied places. Bowling was a favorite activity in her later years. She made many friends as she continued to bowl well past age 80. Her favorite pastime was to watch people. She loved telling stories and talking to people around her. She is predeceased by her parents; her siblings Caywood, Arthur, Frank, Julia and Ned; and one great-granddaughter, Kyla Herron She is survived by her daughters Eddean Didier and her husband, Brian; Elaine Sawyer and her long time friend, Tom Hulburt; and Diann Roberts and her husband, Jerry. Grandchildren are Kyle Herron, Keith Herron and wife, Yvonne; Cindy Bell and husband, Grayson; Jason Roberts and wife, Jessica. Great-grandchildren are Austin Herron, K. J. Herron, Kendall Herron, Olivia Herron, Sierra Herron, Camden Bell, Jackson Bell and Reese Roberts and one great-great grandchild, Ethan Crowe. Also surviving her is a very special nephew Arthur Straehla and a very special cousin, Ann Cauble and several other nieces and nephews. She was a faithful member of Beaverdam Baptist Church, Asheville where she was a member of the Golden Circle Sunday School Class. The funeral service will be held Friday, September 16 at 2 p.m. at the church. The family will receive friends one hour prior to the service.

Louise Straehla Sawyer passed away September 11, 2016. She was born in Jacksonville, Florida on October 10, 1921 to Charles Straehla and Virginia Murdock Straehla. She came to Asheville as a young teenager. She graduated from Grace... View Obituary & Service Information

The family of Mrs. Louise Sawyer created this Life Tributes page to make it easy to share your memories.

Send flowers to the Sawyer family.