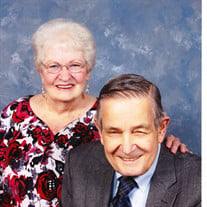 Luther B. Thigpen, 89, died Thursday, August 11 at Deerfield Episcopal Retirement Community. Born December 7, 1926 in Macon, Georgia to the late Emmett B. and Mary Belle Livingston Thigpen, he married the love of his life, Rita Garvin Thigpen, in 1950. Rita predeceased him in October, 2015 but they are survived by their four children: Doug Thigpen (Fran) of Swannanoa, Gail T. Israel (Lonnie) of Candler, John Thigpen of Rock Hill, SC and Patricia Champion (David) of Hixson, TN. He is also survived by nine grandchildren (Andrew Thigpen, Alan Israel, Amber Israel-Berryman, Trevor Israel, Matthew Thigpen, Sean Thigpen, Emily Champion, Laura Champion and Phillip Champion) and three great-grandchildren. A great-grandchild, Ashton Bennett, predeceased him. Following his graduation from high school, Luther entered the US Army in March 1945 and after his discharge attended Mercer University, graduating with a degree in journalism. He worked as sports editor for the Macon Telegraph, managing editor for the Augusta (GA) Herald and managing editor for the Atlanta Times before settling with his family in Asheville in 1965, where he served as Executive Editor of the Citizen-Times from 1969-1980. In 1980 he was named Publisher of the Clarksville, TN Leaf-Chronicle until his retirement in 1992. He and Rita moved back to Asheville in 1995 to be near grandchildren. While in Asheville, Luther was Chair of the Housing Authority and was a member of the Rotary Club of Asheville (President 1974-75). In Clarksville he served as President of United Way of Clarksville & Montgomery County. In later years Luther researched family history and applied his journalism skills to writing self-published genealogies which he shared generously with relatives. The family will receive visitors at Morris Family Funeral Home, 304 Merrimon Avenue in Asheville, from 5-7 p.m. on Monday, August 15, and a funeral Mass will be celebrated at St. Eugene Catholic Church, 72 Culvern Street, Asheville at 11:00 a.m, Tuesday, August 16, 2016. The family wishes to express its deep gratitude to everyone at Deerfield Community for their loving care of Luther. In lieu of flowers, donations may be made to the Deerfield Employee Appreciation Fund or to a charity of one's choice.

The family of Mr. Luther B. Thigpen created this Life Tributes page to make it easy to share your memories.

Send flowers to the Thigpen family.