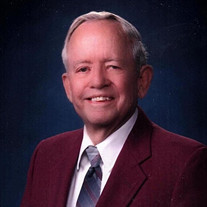 Lynwood Baldwin Jackson Jr. age 83, passed away peacefully at the Care Partners Solace Center in Asheville, NC on Wednesday, December 28, 2016. He was the son of the late Lynwood Baldwin Jackson Sr. and Marguerite Garland Jackson. He was preceded in death by his sisters Dorothy Jackson Fogarty and Lorraine Jackson Ellis. Lynwood was born in Asheville, N.C. on June 17, 1933 where he lived until 1947 when the family moved to Ft. Lauderdale, Fla. He attended Ft. Lauderdale High School where he met his wife to be, Pauline Ann Marie Arpin. They were married on March 8, 1952. Lynwood was a good athlete and superb water skier and was listed as the 17th person to have barefoot waterskied, in 1950. He also swam for the FLHS swim team and made it to the state meet his junior year, finishing 3rd in the breast stroke. He was also a scratch golfer and once shot an eagle and a hole in one in the same day at the Biltmore Forest Country Club in Asheville, NC, on his 18th birthday. Lynwood attended Ga. Tech in the fall of 1952, majoring in architectural engineering and also attended night school at the U. of Ga. School of Business. After 2 years of school and supporting their first child, Lynwood and Polly moved to Ft. Lauderdale as Lynwood was invited to join his father in the construction business. After raising their family, Lynwood and Polly yearned to get back to the mountains of western N.C. They purchased 40 acres in Haywood County (Waynesville) in 1974 and built their home there. The property became a classic “Old McDonalds Farm” as every animal known to frequent the mountains seemed to make their home there! Advancing age and a bad knee eventually led Lynwood to sell the property in 1989 as he and Polly relocated to Asheville where he resided until his death. Lynwood’s pride and joy were his family and his dogs and cats and he leaves a large number of both, as his legacy. Lynwood served on numerous boards and committees over the years including, Past Vice Chairman Scottish S&L and Appalachian S&L., Board of Advisors, Mars Hill College, established Boy Scout Troop 266, Ft. Lauderdale, Fla., Board of Directors Boy Scouts of America, S. Fla. Council, Board of Governors Lauderdale Yacht Club, Rotary Club of Ft. Lauderdale, Fla., member, Mahi Shrine Temple, Miami, Fla., Past member Biltmore Forest Country Club (from 1950-2011), past member of Christ Methodist Church Ft. Lauderdale, Fla. Lynwood was the third generation Jackson to build in and around Asheville and his grandson, Kevin Jackson, who joined his father, Ken in the construction and real estate development business in August of this year, is now the 5th generation of Jackson's to continue the tradition. Surviving are his beloved wife of 64 years, Polly Arpin Jackson; his children Lynwood Baldwin Jackson lll (Susan) of Tryon, NC and Kenneth Gregory Jackson (Donna), of Asheville, NC; grandchildren, Lisa Broyles (Brad) of Saluda, NC, Amy Hitson of Maryville, Tenn., Katie Hixson (Scott) of Tryon, NC, Jennifer Attreau (Eric) of Fletcher, NC, Heather Laster (Al) of Charlotte, NC, Kenny Jackson (Courtney) of Clemson, SC and Kevin (Jennifer) of Asheville, NC and 15 great grandchildren (number 16 is due in March of 2017). The family would like to thank the tireless employees, including Christopher, Anthony, Roxie and Deb and all of the nurses and Doctors at the John F. Keever Solace Center in Asheville for the time and loving care they exhibited for Lynwood during his 9 day stay there and the 3 months of home health care. A funeral service and celebration of life will be held at 2 pm on Wednesday, January 4, 2017 at Central United Methodist Church in Asheville, NC with Rev. Rob Blackburn officiating. The family will receive friends in the Fellowship Hall immediately following the service. Those wishing to make a memorial donation in Lynwood’s memory are encouraged to consider Brother Wolf 31 Glendale Ave. Asheville, NC 28803 or the Care Partners John F. Keever Solace Center 21 Belvedere Rd. Asheville, NC. 28803.

The family of Mr. Lynwood Baldwin Jackson Jr. created this Life Tributes page to make it easy to share your memories.

Send flowers to the Jackson family.