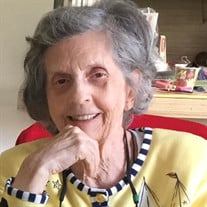 Madelyn Joan (Briggs) Strickland, of Asheville, NC passed away peacefully surrounded by her children on June 14, 2018 near Raleigh, NC. She was a sixth generation native of western North Carolina. She is survived by her son, James William Strickland, and his wife, Joann (Smith) of Spartanburg, SC; daughter, Elizabeth Nina Strickland of Raleigh, NC; and son, Peter Briggs Strickland, and his wife Cindy (Holloway) of Angier, NC; her brother, William Harrison Briggs, and his wife, Sandra Jean (Burns) of Brevard, NC; her uncle, Thomas Frederick Kenny, and his wife, Maxine of Sarnia, Ontario; three grandchildren, Christopher Scott Strickland, and his wife, Erin (Rich) of Spartanburg, SC; Stephen Lee Strickland and his wife, Maggie (Lally) of Carlisle, PA; and Sadie Leigh Strickland of Angier, NC; and the delight of her old age: two great grandchildren, Samuel Henry Strickland and Mary Scott Strickland of Spartanburg, SC, as well as beloved cousins, nieces and nephews. She was looking forward to meeting Stephen’s and Maggie’s new baby due in November. She was predeceased by her father and mother, Henry Harrison and Madelyn Wilkinson (Kenny) Briggs of Asheville and her sister, Deborah Kenny (Briggs) Lynch of Denver, CO. She was a graduate of Stephens College and Duke University and received her Master’s Degree from the University of North Carolina at Chapel Hill. She lived in Jacksonville, NC for over twenty years and was very active in civic affairs. She then lived in Chapel Hill, NC for sixteen years while she worked at Duke Medical Library; after which she retired to her hometown of Asheville, NC. She also made her winter home first in Everglades City, FL, then in Longboat Key, FL. She was a life long democrat, an avid gardener (member of the French Broad River Garden Club) and a supporter of many causes, among which were Hospice, orphanages, clean air organizations, Manna Food Drive, and Meals for Wheels. Friends who wish may send donations to: Transitions LifeCare, 250 Hospice Circle, Raleigh, NC 27607, or Manna Food Bank, 627 Swannanoa River Road, Asheville, NC 28805. A private graveside service will be held at Calvary Episcopal Church in Fletcher, NC later this summer.

Madelyn Joan (Briggs) Strickland, of Asheville, NC passed away peacefully surrounded by her children on June 14, 2018 near Raleigh, NC. She was a sixth generation native of western North Carolina. She is survived by her son, James William... View Obituary & Service Information

The family of Madelyn Joan Briggs Strickland created this Life Tributes page to make it easy to share your memories.

Send flowers to the Strickland family.