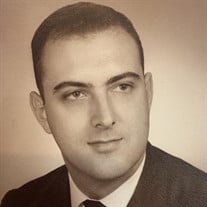 Malcolm Perry Parada, MD, 82, died unexpectedly November 4 at home. Malcolm was born July 14, 1938 in Derby, CT to Lydia (Perry) and Manuel Parada. He was raised in Great Neck, Long Island, NY and attended Great Neck High School. After graduating summa cum laude from Oberlin College, Mal enrolled in medical school at University of Cincinnati College of Medicine, finishing in 1964. He served as a Lieutenant in the U.S. Navy prior to completing residency in Obstetrics & Gynecology at University Hospital in Cleveland. Mal moved his young family in 1971 to Salisbury, NC to join the practice of Salisbury Clinic for Women, PA. Dr. Parada spent a 30-year distinguished career in medical practice, delivering well over 6000 babies, and was beloved by his patients of several generations. He retired in 2001 and relocated to Asheville in 2004. A devotee of the arts, Mal played many roles on stage over the years with Piedmont Players. He was gifted with an operatic bass voice, singing in the choirs of St. John’s Lutheran Church in Salisbury, Grace Covenant Presbyterian Church in Asheville, and the Asheville Cantaria. Mal was active in the YMCA, through which he became an ACC swimming judge and was also resident physician for many summers at Charlotte YMCA’s Camp Thunderbird. Mal Parada will be remembered for his warm, engaging personality and brilliant mind. He never met a stranger and collected friends from all walks of life. Mal had a quick, irreverent sense of humor, and was known for his vast repertoire of jokes and limericks. He was steadfastly devoted to his children and grandchildren, never failing to give of his time and attention. Mal’s family reflects with gratitude upon his unconditional love and the example he set for living life well. Surviving are his children, Jennifer (Mickey) Thomas of Cornelius, NC, Brian Parada of Garner, NC and Eric (Kathy) Parada of Marietta, GA; his grandchildren, Ryan, Ian and Anna Wheeler, Savannah and Rebecca Parada, and Wilson, Benjamin, Lydia and Cecelia Parada; and step-grandchildren, Will and Nelle Thomas. He was predeceased by his wife Alice in 2014. A private family funeral was held at Morris Funeral Home. He will be laid to rest in the memorial garden of Grace Covenant Presbyterian Church. Gifts in Malcolm’s memory may be made to the YMCA of Greater Charlotte, Camp Thunderbird Campership Fund: ymcacharlotte.org/donate/Camp Thunderbird or mail to Camp Thunderbird, 1 Thunderbird Lane, Lake Wylie, SC 29710. Online condolences: morrisfamilycaregroup.com. The Parada family wishes to express a bag full of thanks to R.G. – you know who you are.

The family of Malcolm Perry Parada, MD created this Life Tributes page to make it easy to share your memories.

Send flowers to the Parada, family.