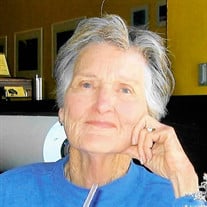 With profound sadness, we announce the death of Marcia, our loving mother, on September 29, 2021. For five years she struggled against the progression and indignity of dementia finally succumbing in her sleep at the Brooks-Howell Home in Asheville. She was 95 years old. Marcia was married for forty-seven years to Victor Thomas Covington of Troy, Alabama who died in 1997. She is survived by their children: Margaret Covington Danelski (Edward) of Philadelphia, Peter James Covington (Nancy) of Charlotte, Scott Hughes Covington of Asheville and Mary Constance Covington of Atlanta. She also leaves behind her grandchildren Peter Danelski (Andreza); Elizabeth Strauss (Charles), Matt Covington (Vanessa) and Emily McCallister (Matt); Najda Tzeric and Michael Lee. Her great-grandchildren are Anna, Charlie, Tessa and Peter Strauss; Townes and Coda Covington and Lucy and Bash McCallister. They knew her as Grandmarcia. Marcia Ann Hughes was born on January 29, 1926, in Natchitoches, Louisiana, the daughter of Horace Henry and Emily Poleman Hughes. After college Marcia moved to New Orleans where she worked for the Freeport Sulphur Company and she met her future husband, Vic. They married on September 5, 1949 in Cambridge, Massachusetts where Vic was pursuing his MBA at Harvard University. After five years with State Street Bank in Boston Vic received a job offer from American Enka Corporation later known as AKZONA, Inc. Asheville became their home. Marcia possessed endless energy. On occasion, she reminded her four children that she had little tolerance for sitting or complaints of boredom. It was the signal to escape outdoors before she put a broom or a rake in our hands. Home and family were most important to her but she also made time to serve her community. For over twenty-five years, Marcia volunteered at St. Joseph’s Hospital, she was an intake counselor for Asheville Buncombe County Christian Ministry, she worked in the office at St. Eugene Catholic Church and she was a member of her local garden club, “The Gardeneers.” She was an active member of St. Eugene’s beginning with the Church’s formation in 1959. Marcia found joy and accomplishment in many ways: walking, hiking, swimming, bowling (a passing phase), white water rafting, upholstering furniture, and tending to her garden and her yard. She occasionally accompanied Vic on trips to New York and cities in Europe. She loved dancing and confessed once that she had dreamed of dancing in the chorus on Broadway. Instead, there were occasional Sunday afternoons when she and Vic would dance together and then teach the kids. No Covington descendant has yet to dance on Broadway. Marcia was an avid Bridge player, dividing her time between two clubs she referred to as the Catholic and the Protestant. She had hoped that having four children would mean she could put together a Bridge table at any time. Unfortunately, two of her children had no card sense. As the family grew Grandmarcia would play cards with any child willing to learn and whether it was Bridge or Go Fish they all learned Mom’s motto: “There is no love in cards.” Marcia was grateful for her many wonderful friends and neighbors. She lived a full life as a wife, mother, homemaker and community member. She instilled in her sons and daughters love and kindness, strong values and a positive outlook. She will be with us always. The family would like to give special thanks to the staff of the Brooks-Howell Home for the exceptional care and kindness they bestowed on Mom. A memorial service will be held at St. Eugene Catholic Church, 72 Culvern Avenue, Asheville at 10:00 am on Saturday, October 16, 2021. Burial will be private. Donations in Marcia’s honor may be made to the charity of your choice or to The Society of St. Vincent de Paul, in care of St. Eugene Catholic Church, 72 Culvern Avenue, Asheville, NC 28804.

With profound sadness, we announce the death of Marcia, our loving mother, on September 29, 2021. For five years she struggled against the progression and indignity of dementia finally succumbing in her sleep at the Brooks-Howell Home in Asheville.... View Obituary & Service Information

The family of MARCIA HUGHES COVINGTON created this Life Tributes page to make it easy to share your memories.

With profound sadness, we announce the death of Marcia, our loving...

Send flowers to the COVINGTON family.