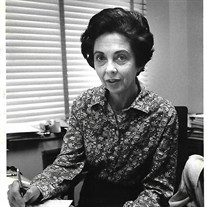 For those who knew and loved Marguerite Johnston Hays, her quiet passing belies the magnitude of who we’ve lost. An accomplished woman of great intelligence, unwavering empathy and deepest compassion, Marguerite died on June 21st at Brooks-Howell Home in Asheville. She was 84. Born and raised in Greenville, South Carolina, she lived there most of her life. Marguerite and her younger brother were the children of Greenville lawyer John E. Johnston Sr. and Ruth Marguerite Jones. Marguerite’s mother died giving birth to a stillborn boy when Marguerite was six years old. The last memory Marguerite had of her mother was sharing a chocolate sundae at a drug store fountain, and for the rest of her life, she had a passion for desserts -- a passion she generously passed on to her sons. Marguerite attended Greenville High School where she was salutatorian. She attended Agnes Scott College in Atlanta where she learned, among other things, how to drink her coffee black. She transferred to Furman University her sophomore year and moved back home to live with her father. Even at that time, Furman already had a long tradition in her family. Her father had attended Furman and her mother had attended Greenville Woman’s College, which merged with Furman’s men’s college. Marguerite’s father’s father, a Baptist minister, attended the Furman Academy and Theological Institution in Edgefield, SC. Marguerite began her writing career as a reporter and editor at the Greenville News. In 1955, she met Tom Hays, a Midwesterner who had been traveling through the South working for the Cotton Council. Tom shared Marguerite’s love of literature and classical music as well as her love for chocolate. They married and moved to Austin, Texas for Tom to pursue a graduate degree in creative writing at the University of Texas. While in Texas, Marguerite gave birth to their first son, Tommy. When they returned to Greenville, Marguerite went to work for WFBC-TV (now WYFF) as a copywriter and operations director. During this time, Chris, their second child, was born. After a brief stint as an editor at Liberty Life Insurance Company, she became Publications Editor at Furman University and ultimately was promoted to Director of University Relations, a position she held for over 30 years. As one of the few women department heads at that time, Marguerite played a key role in shaping Furman, including helping navigate Furman’s withdrawal from the South Carolina Baptist Convention. Marguerite was known as an extremely talented administrator who adamantly believed in Furman’s mission as a liberal arts college and brought to the school her passion and high standards. What gave her the most pleasure was editing the Furman Magazine, which, under her guidance became a show piece for the university, winning countless national university publication awards over the years. Marguerite planned out each issue, recruiting writers and photographers from faculty, staff, students and alumni and wrote many articles herself. She spent many a late night with her husband, who also worked in college publications, laying out the magazine, cropping photos and spreading out the dummy pages across the living room floor. When Marguerite retired, she took on a few writing projects but mostly she devoted her time to caring for her husband who suffered from dementia. She kept him at home as long as possible and then visited him every day at National Healthcare, feeding him, doing his laundry and taking him for rides out into the countryside. When Tom died in 2000, she was able to enjoy herself more, attending concerts and museums and movies with her friends, several of whom she’d known since Greenville High days. She became very involved in the OLLI program at Furman, not only attending classes, but recruiting faculty to teach in the program. Marguerite worked in her garden, went for long walks through her neighborhood and tended to her beloved cats. She had great compassion for all creatures, adopting numerous cats over the years and finding homes for others. She went to great lengths to escort spiders out of the house. Once as a child, when her family visited friends with a screened-in porch, she spent much of her time opening the door so the flies could escape. Of all Marguerite’s many loves family was first and foremost. With the death of her husband, Marguerite spent more time with her beloved brother John E. Johnston, Jr., a Greenville lawyer, who was very supportive during Marguerite’s caretaking years of Tom. Close since childhood, Marguerite and Johnny supported each other throughout their lives, especially during the years after the loss of their spouses. Johnny’s children and grandchildren were essential company for Marguerite over the years. Marguerite was an inspiring and fiercely loving mother, always supportive, and always encouraging of following one’s dreams. It’s no accident that Chris became an architect and Tommy a novelist, and she always kept up with her son’s projects. She kept up with their families as well. She enjoyed nothing more than visits from Chris, his wife Allison and his two children, Emily and Christopher or from Tommy, his wife Connie and his children, Max and Ruth. She always had brownies, cookies, a cake or a pie at the ready to sweeten these visits. It was a cruel irony that eventually Marguerite herself lapsed into dementia and was eventually moved to Brooks-Howell Home in Asheville, near Tommy and Connie, a devoted daughter-in-law. At Brooks-Howell she received the best of care and carried on her own high standards, often asking staff if they knew how to spell the word they’d just used and when the unsuspecting staff member said they did, she’d say, “All right then, let’s hear it.” A memorial service will be held Sunday, July 3, at 1 pm in the Garden Room of Charles E. Daniel Chapel. Memorial contributions may be made to MemoryCare at 100 Far Horizons Lane, Asheville, NC, 28803. .

For those who knew and loved Marguerite Johnston Hays, her quiet passing belies the magnitude of who we&#8217;ve lost. An accomplished woman of great intelligence, unwavering empathy and deepest compassion, Marguerite died on June 21st at Brooks-Howell... View Obituary & Service Information

The family of Mrs. Marguerite Hays created this Life Tributes page to make it easy to share your memories.

For those who knew and loved Marguerite Johnston Hays, her quiet...

Send flowers to the Hays family.