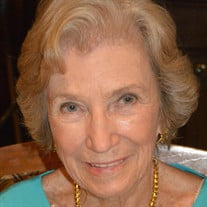 Mariza de Faro Adamson, the daughter of a Brazilian diplomat and a devoted and loving wife, mother, grandmother, and great-grandmother, died on September 15 in Asheville, NC. She was 92. The cause was complications of ovarian cancer, her family said. Born in Rio de Janeiro, Mariza began her education in England and then attended junior high and high school at the School of the Holy Child in New York City. She graduated from high school at the Colegio de Sion in Rio at the age of fifteen. She then attended Andrews College in Rio for two years, taking the pre-law program. Years later when living in Massachusetts, she obtained a paralegal certificate at Bridgewater State College. In 1942, accompanying her father to Caracas, Venezuela, where he served as the Ambassador of Brazil, she met her future husband, Walter Adamson, then serving as Asst. Naval Attaché at the American Embassy. They were married in January 1945 and lived together for seventy years until his death late last year. After the war, they moved to New Britain, Conn., where Walter worked at what is now Central Connecticut State University. In 1956 they moved to the Washington D.C. area when he took a position with the US Department of Education and later with the Department of State and the World Bank. His career took them to posts in Guatemala, Costa Rica, Brazil, and Peru. When Walter retired from government service, he took an academic position at Bridgewater, and they made their home in Duxbury, Mass., for fifteen years. Then, in 1987, they retired to Asheville. In Asheville, Mariza was actively involved in volunteer work, first with the local radio station reading for the blind and then, for over eighteen years, as a Spanish translator at Mission Hospital, St. Joseph Campus. She was an accomplished linguist who spoke Spanish and French as well as her native Portuguese and English. She also volunteered at the Beaver Dam Run condominium community where she and Walter resided. Here she was for many years in charge of the group working at the Adopt-A-Highway Program. She is survived by her son Walter and his wife Lauren of Atlanta; her son David and his wife Karen of Washington, DC; her daughter Carolyn and her husband Charles of Randolph, Mass.; her grandsons Daniel, Nash, and Eddie; her granddaughters Jillian and Sally; her four great-grandchildren Theodore, Janelle, Jasper, and Thomas; and her nephew Carlos and his wife Jacqueline of Cincinnati, Ohio. Mariza will be buried next to Walter at the State Veterans’ Cemetery in Black Mountain, NC. In lieu of flowers, friends of Mariza may wish to remember her with a donation to the Solace Center of Care Partners at 21 Belvedere Road, Asheville, NC 28803, or to a charity of their choice.

Mariza de Faro Adamson, the daughter of a Brazilian diplomat and a devoted and loving wife, mother, grandmother, and great-grandmother, died on September 15 in Asheville, NC. She was 92. The cause was complications of ovarian cancer, her family... View Obituary & Service Information

The family of Mrs. Mariza de Faro Adamson created this Life Tributes page to make it easy to share your memories.

Mariza de Faro Adamson, the daughter of a Brazilian diplomat...

Send flowers to the Adamson family.