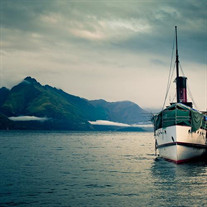 Marjorie Whittaker, 94, Asheville died on Sunday, August 12, 2018. Born in Woodbridge, Connecticut on June 22, 1924, Marjorie was the daughter of the late Howard W. and Josephine F. Haggard. She was home schooled through the 6th grade, then attended Mrs. Day’s School for girls in New Haven (now part of Hopkins School). She then attended Mount Holyoke College and studied pre-med but married an architect student before graduation in 1944. During his army service in ocean rescues, she lived in Gulf Port, Mississippi and San Luis Obispo, California. They moved to Fort Lauderdale where he became a prominent architect, while Marjorie, with her lifelong love of sailing, became active in arranging yacht races in southern Florida, and had frequent articles published in sailing magazines with her photographs. She reported on many races, including the America’s Cup. She also became interested in tall ships, and in 1976 was invited to photograph the bicentennial celebration on the Hudson River from aboard the aircraft carrier USS Forrestal. Marjorie became very active in the Outward Bound activities and became a lifetime director. She organized work and improvement activities at the Everglade City, Florida location and was active in the North Carolina Outward Bound programs. She married Homer C. Whittaker, retired lieutenant commander, in 1982 after her divorce in 1970. She moved to Winter Park, Florida and continued her photography and writing as well as worldwide travels and sailing. She moved to Asheville, North Carolina, after the death of her husband in 2011, and lived at Deerfield Episcopal Retirement Community, where her brother, William H. Haggard also resides. Marjorie loved cats. She is survived by her brother, William H. Haggard; her nephew, Robert H. Haggard; her grandnieces, Andrea Wakely and Shelby Gillion and their families. In lieu of flowers please send contributions to North Carolina Outward Bound, 2582 Riceville Rd, Asheville, NC 28805.

Marjorie Whittaker, 94, Asheville died on Sunday, August 12, 2018. Born in Woodbridge, Connecticut on June 22, 1924, Marjorie was the daughter of the late Howard W. and Josephine F. Haggard. She was home schooled through the 6th grade, then... View Obituary & Service Information

The family of Marjorie Whittaker created this Life Tributes page to make it easy to share your memories.

Send flowers to the Whittaker family.