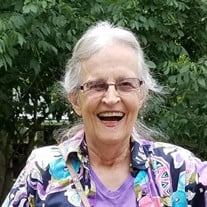 Martha “Bobbie” J. Schaefle, 87, of Asheville died on Tuesday, March 22, 2022. She was born in 1934 to Charles and Hazel Hood in Evanston, Il and was the youngest of 6 children. She grew up in Evanston and graduated from Evanston Township HS. During the early part of her 28-year marriage, she spent a few years living across the US and Japan during her husband’s Air Force career. They settled in Des Plaines, Il to raise their four children. This is also where Bobbie volunteered at Maple Elementary School, the Crisis Hotline and singing in the church choir. She also loved baking bread from scratch for the family as well as donating to bake sales. When all the children were busy in school she continued her education and became licensed as a nurse and worked at Lutheran General Hospital. After the death of her oldest son, she decided to relocate to North Carolina to be closer to her sister and settled in Asheville in 1987. She began working for Mountain Area Hospice, volunteered for Meals for Wheels, Haw Creek Elementary, and Reach to Recovery. She loved hiking and participated in various hiking groups when she first moved to Asheville. Anytime anyone visited she would take them on a great hike in #BobbiesMountains with some apples and a bottle of water. She is survived by her children Stephen, Peter, and Elizabeth, grandchildren Stephen, Jonathan, Paul, Savannah, Jacquelyn, John, Chloe, Josiah, and Hannah, and 5 great grandchildren besides the many nieces and nephews. Bobbie was preceded in death by her oldest son Jack and an infant great-granddaughter Penelope. In lieu of flowers, Bobbie asked that donations be made to Patriot Guard of NC ℅ Dan Palmer 100 Michael Dr Hendersonville NC 28791 or a charity of your choice.

The family of Martha Jane Hood Schaefle created this Life Tributes page to make it easy to share your memories.

Send flowers to the Schaefle family.