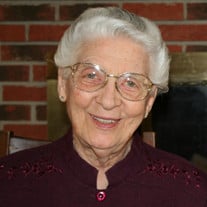 Martha Jo Ann Strunk, 91, passed away on Friday, July 20, 2018 at Brooks Howell Home. Martha was born on November 2, 1926, to Allen R. and Addie Ann Johnson, in Tipton, Indiana. She was the second of six children. Both parents were faithful members of the Methodist Episcopal Church, so it’s no surprise that by the age of 14, she felt called to missionary service. Martha graduated from Taylor University in 1948, with a BA degree. The Women’s Division of the Board of Global Missions confirmed her call and following a year of study at Scarritt College in Nashville, Tennessee, Martha went to Brazil. After a year of language study (1952) she taught Bible and Christian education classes at the Junior College Department at Colegio Bennett, the largest Methodist School for girls in Brazil, located in Rio de Janeiro. While at language school Martha met Leon Strunk, a short-term missionary working at a rural boarding school. They were married December 7, 1953, and honeymooned on the tropical island of Paqueta in the bay at Rio de Janeiro. Their marriage severed her relationship with the Women’s Division. They returned to the United States for Leon to go to seminary at Emory University in Atlanta, Georgia. Music was a big part of her life, and a way to give joy to everyone around her. Alongside Leon, she served teaching youth and adult classes, helped organize various societies of women, directed choirs, composed and arranged music for choirs, composed a Christmas Cantata, taught Bible and Christian education classes at the Conference Seminary, and for a time was secretary to the bishop. In 1975 Martha began a two-year probation period as pastor. She was the first woman elder in that Conference, ordained in January, 1977. During her 21 years as ordained pastor, she guided two of her churches in building new sanctuaries, and led a new congregation in developing a Community Center, which they named after her. She “retired” in 1992, but returned to Brazil to serve six more years as a volunteer. Martha and Leon entered the community of Brooks-Howell Home in May 1998 and became associate members of Biltmore United Methodist Church. She worked tirelessly in the ministries of that church as well as continuing to use her musical gifts directing the choir at Brooks-Howell Home and planning music for their chapel services. Martha is survived by three children: her daughters, Alycia Johnson (Mandel) and Joanna Cannon (Patty); and her son, Nathanael Strunk (Maria Alice). She is also survived by five grandchildren and one great-grandchild. A celebration of her life will be held on Monday, August 6 at 3:30 PM in the Memorial Chapel of Brooks-Howell Home with the Rev. Ashley Crowder Stanley officiating. Gifts in her honor may be made to Brooks-Howell Home, 266 Merrimon Ave., Asheville, NC or CarePartners Hospice Foundation, PO Box 25338, Asheville, NC 28813.

Martha Jo Ann Strunk, 91, passed away on Friday, July 20, 2018 at Brooks Howell Home. Martha was born on November 2, 1926, to Allen R. and Addie Ann Johnson, in Tipton, Indiana. She was the second of six children. Both parents were faithful... View Obituary & Service Information

The family of Mrs. Martha J. Strunk created this Life Tributes page to make it easy to share your memories.

Send flowers to the Strunk family.