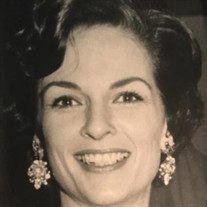 Mary Jo Wise Whitney Broomall was born in Clarksburg, West Virginia on April 1, 1929 to Beatrice Briggs Wise and Emery D. Wise MD. She grew up in tiny Everettville, WV where her father was a general practioner and surgeon serving coal miners and local folk during the Depression years, after which her family moved to Fairmont WV. On retirement, Mary Jo’s father had practiced medicine in Marion County for 56 years just miles from where he was born. Mary Jo attended Fairmont West high school and graduated high school from the Dwight School for Girls in Englewood NJ. She then attended Duke University and the Peabody Conservatory of Music in Baltimore. She met her first husband, Courtney Whitney Jr, in Washington D.C. Courtney and Mary Jo had three children – Angela Whitney of Asheville NC, Carole Whitney of Denver CO, and Colonel Courtney Whitney III of Richmond, Va. In addition to her 3 adult children, Mary Jo had 4 grandchildren from New York City to Arlington, VA to Asheville to San Francisco. Mary Jo’s second marriage was to Lowell Broomall, a conductor, organist and NYC executive for Western Union International, who died in 1991. They made their home in metropolitan NY and NJ. After Lowell’s passing, Mary Jo moved to Silver Spring MD in 1992, and then to Asheville NC in 2005 where she lived at Givens Estates until her passing recently after a short illness. The light of Mary Jo’s soul was music. She was a dramatic soprano who sang with great passion and commitment. She studied voice with Kathryn Aspinall at Juilliard, and with Karl Laufkotter at Peabody. She sang large choral works in New York and New Jersey, with Donald MacDonald in NYC, Robert Shaw in Princeton, NJ, and Leonard Bernstein at Philharmonic Hall Lincoln Center. She sang at churches in NYC and New Jersey, and at the largest synagogue in New Jersey, B’nai Abraham. Performing mostly sacred music, she made her most treasured friends thru her professional work at church and synagogue with whom she was still close until her death. She passed on her devotion to classical music to all her children, especially Carole, who was a professional cellist in NY and NJ with the New Jersey Symphony, and now in Denver and for decades with the Santa Fe Opera Company in the summer. Mary Jo sang in the Givens Estates choir, King Goslin’s Gracious Light choral group singing at the Biltmore House and Biltmore Village for Christmas holidays, as well as Calvary Episcopal Church choir just outside Asheville, to whom she donated her baby grand piano, and where she will be interred in the Calvary churchyard at Calvary. Even into her 80’s Mary Jo was considered a music leader in her singing groups. She always looked for “an energized choir with strict standards under a charismatic director.” Mary Jo was known as a uniquely free spirit, flamboyant in taste and manner. Known affectionately to her choral director at times as “Mighty Mouth”, all knew she was present by her quite audible and endearing “Hoo-Hoo” called with a singer’s flair as she approached. Mary Jo was a member of Daughters of the Revolutionary War and Daughters of Colonial Wars, and was a great researcher in genealogy for branches of her family tree. Besides music and singing, her long love affair with Corvettes began with her 1967 Corvette and continued till her death with her 2000 Corvette. The family requests that in lieu of flowers, commitments to hear and support local artistic groups, including the many arts organizations here in Asheville. Funeral arrangements are being made with assistance from Morris Funeral & Cremation Care, a private graveside service will be held at Calvary Episcopal churchyard.

The family of Mary Jo Broomall created this Life Tributes page to make it easy to share your memories.

Send flowers to the Broomall family.