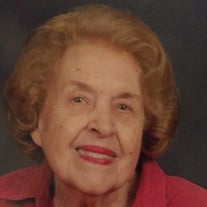 Mary Petersiel Schochet left this earth “to go dancing into the ‘next thing’ with” her late husband Sidney on November 10, 2016. That’s how her granddaughter described Mary’s next adventure to her in her last hours. Born October 3, 1918, in Richmond, VA, to Nathan and Celia Amster Petersiel, Mary excelled in business at a young age. She began working in her father’s small grocery shop during the depths of the Depression when she was 8 years old. And she retired in 2006 from the Asheville retail businesses she and her husband owned. Hers was an 80-year run of retail expertise. Mary came to Asheville as a war bride in 1944. She met her husband Sidney Schochet at a dance for WWII soldiers in Richmond, VA. When she came to Asheville, she became part of a family with roots there going back to 1887. The large extended Blomberg family’s many members owned retails stores throughout downtown Asheville for generations. Mary and Sidney were the last ones of that line, ending with Mary’s 2006 retirement one year after Sidney’s passing. As co-owner of The Bootery, later called The Star Bootery, and A Dancer’s Place, Mary outfitted four generations of Western North Carolina’s dancers including one Miss America, a family friend. Mary and Sidney also outfitted many of the area’s cowboys with boots and hats; city workers with warm gloves and work boots; majorettes with parade boots and batons; and citizens of WNC with tennis shoes; dress shoes; bedroom slippers; Levi’s, Wrangler and Lee jeans; Converse Chuck Taylors; bellbottoms and go-go boots to name just a few of the items Mary and Sidney fit with pride six days a week for six decades. One of the pillars of the post-WWII downtown business scene, Mary was often greeted by customers wherever she went, sometimes called out to as “Miss Bootery” by folks who grew up being brought into her stores by parents or grandparents but didn’t know her name. She would smile and greet them all warmly. Mary was active in Asheville’s civic life, serving on the boards of many local organizations including the early years of Blue Ridge Mental Health, the Asheville Civic Ballet, Beth Ha Tephila Sisterhood, and the Jewish Community Center. Congregation Beth Ha Tephila served as a cornerstone of family life for Mary and her husband and two children, as did the Asheville Jewish Community Center. Mary and Sidney faithfully attended BHT’s Friday night services for more than 60 years and were happy to greet newcomers and friends at the many social gatherings of both institutions. Mary relaxed into her favorite hobby in the Asheville duplicate bridge community. Much of her non-working time was spent in friendly, fun competitive card playing at The Bridge Room where her closest friends were made. She attained the level of Life Master in 1974. Duplicate bridge continued to provide a social community after Mary retired to Chapel Hill, NC, in 2006. She was active in the Durham duplicate bridge scene and ran the duplicate bridge game at The Cedars of Chapel Hill for several years. Mary is survived by her daughter, Jan Schochet, her son Barry Schochet (Gayle) and granddaughter Amanda Schochet and a step-brother Allen Petersiel. Mary’s predeceased family include her parents, her beloved half-sisters Rhoda Petersiel Pearlman and Beverly Petersiel, a step-sister Maxine Mullen and her beloved brother-in-law Eugene Schochet and sister-in-law Lillian Schochet Levy. The family would like to thank the Cedars of Chapel Hill for providing Mary with a caring and easy community to be a part of for the last 10 years of her life. We especially want to thank Mary’s caregivers over the last two years, Evangeline Worrell, Mariana McAnuff, Noleen Collins, Shauna Killough, Alice Kortor, Carlette Fields, Shirley Starks and the many other CNAs from Cedars Home Health Care who kept Mary happy and healthy. Thanks also to nurse Karen Ginsburg. We also deeply appreciate the kind, thoughtful and excellent care provided over the last seven years by Dr. Steven Kizer, his assistant Yvette Hall and his staff at the UNC Geriatric clinic—nurses Lisa and Isobel, scheduler Mario and all those on phone support. In addition the staff of the MICU department at UNC Hospital served Mary in the best way possible during her last few days. Funeral services are at 2:00pm on Sunday, November 13, 2016, at Congregation Beth HaTephila followed by a gravesite service at Riverside Cemetery. After the gravesite service, everyone is invited to attend a reception at the social hall of Beth HaTephila. Shiva will be at the residence of Jan Schochet on Sunday, November 13, 2016 at 7:30pm and Monday, November 14, 2016 at 7:30pm. In lieu of flowers the family requests donations in Mary’s memory be made to Congregation Beth Ha Tephila, 43 N. Liberty Street, Asheville, NC 28801 or The Asheville Jewish Community Center, 236 Charlotte St, Asheville, NC, 28801 or the Employee Fund of The Cedars of Chapel Hill, 100 Cedar Club Circle, Chapel Hill, NC 27517.

The family of Mary Petersiel Schochet created this Life Tributes page to make it easy to share your memories.

Mary Petersiel Schochet left this earth “to go dancing into the...

Send flowers to the Schochet family.