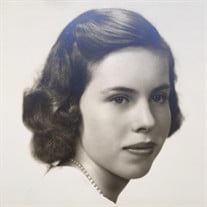 Nancy Owen Cecil, beloved wife of George H.V. Cecil, passed away peacefully at home overlooking her beautiful garden on Saturday, July 9, 2016 surrounded by her husband and six children. Nancy, the daughter of Catherine A. and Charles D. Owen, was born on October 14, 1930 in New Bedford, Massachusetts. Her family moved to Asheville when she was three years old, beginning her life-long dedication to the people of Western North Carolina. Nancy is best known for her love of family and generosity to many people in the community. Her volunteer work started at Memorial Mission Hospital in the mid-1940’s as a candy striper and continued for many decades culminating in her volunteering thousands of hours to the Mission Hospital Gift Shop which provided significant funding for the Hospital. She was a member of the first class of Asheville Country Day School (now Carolina Day School). Throughout her life she has generously supported the education of many deserving students. A passionate and knowledgeable horticulturalist, Nancy was happiest working in her gorgeous garden. She was a member of the French Broad River Garden Club for fifty-five years and her guidance was often sought after by friends and family. Nancy is survived by her loving husband of sixty-one years, George H.V. Cecil, her sister, Jean Owen Izard of Rye, NY, and brother, Charles D. Owen, Jr. of Asheville, NC. She is also survived by her six children: Jack and Sarah Cecil of Asheville, NC, Edith Cecil and Richard Parker of Washington, DC, Catherine and Gordon Taylor of Alexandria, VA, Margaret and John Sinnott of Asheville, NC, Chris and Ruth Cecil of Charlotte, NC, and Louisa Cecil Harrison of New York, NY, as well as sixteen grandchildren and numerous nieces and nephews. Graveside rites will be held at Calvary Episcopal Churchyard in Fletcher at 11:00 AM on Thursday, July 14, 2016. The Right Reverend Robert Johnson, Retired Bishop of Western NC will officiate. In lieu of flowers, memorial donations may be made to the Neonatal Intensive Care Unit at Memorial Mission Hospital, c/o Mission Health System Foundation, 890 Hendersonville Road, Suite 300, Asheville, NC 28803.

The family of Nancy Owen Cecil created this Life Tributes page to make it easy to share your memories.