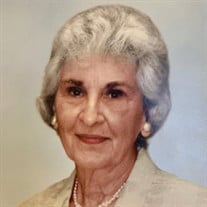 Nancy Darr Conrad Greene eased into eternity on Thursday, May 30, 2019, while holding hands with her husband of 70 years, William (Willie) E. Greene. Nancy was born on June 10, 1927 in her two-story brick home at 711 N. Fulton Street in Salisbury, NC. She was the youngest of the five children of Thomas Edward and Ollie Dove Kenerly Conrad. Nancy was always a little taller than her classmates, very attractive, and just as mischievous as her cat Mickey, who licked the center out of her mother’s lemon pie. She grew up in a neighborhood full of children who skated in the street and played hide and seek until dark. While at Boyden High School, Nancy preferred to take neither of the first nor the second lunch periods and went off campus to Fulton Street Pharmacy just up the street. Finally, Miss Jeter caught her and made her make up 26 hours after school. In her junior year, she and Willie (a 12th year senior) were in the same typing class. He sat behind her, and it made her mad when his bell would ding first signaling him to return the carriage when she hadn’t even finished typing the sentence. Her 1944 classmates elected her as their Most Beautiful Superlative. During World War II, she worked with the Boyden High Victory Club picking cotton and in its Victory Garden growing fresh vegetables for the community. In October 1943, her brother Wade was in the Army Air Corps as was Willie whom she saw off (plus 1 or 2 more) at the train station in Salisbury. She dutifully wrote letters to Willie and another guy in the same barracks, but Willie won out and received her 1943 Christmas photograph. After the War in September 1948, she and Willie were married in Salisbury, and she left her two-story brick home; she and Willie moved into a Pioneer Wagon in the University Trailer Park in Chapel Hill, NC where Willie entered law school. On December 31, 1951, New Year’s Eve, Nancy and Willie moved to Asheville, where he started his law practice. In 1952, they joined Central United Methodist Church. Together, with several other young couples, they formed a Sunday evening young couples class (because no one could make it Sunday morning) which later transitioned into the Sunday morning Manchester Class and ultimately the Covenant Class. At Central United Methodist Church, Nancy, as an associate member of Central UMC Women, helped with Vacation Bible School, took care of the sanctuary altar flowers for a number of years. Also, she designed, sewed, and constructed most of the Christmas Eve Pageant costumes which Central used for several years. In 1952, Nancy joined the Jaycettes and was elected their 1958-1959 president. She delivered Meals on Wheels for over 25 years. She also served as an officer in the PTAs at Ira B. Jones, David Millard, Hill Street, South French Broad, Lee Edwards, and Asheville High. She was a member of the Children’s Welfare League, and the Ruth Davidson Chapter of the NSDAR. She was a fantastic cook; her culinary masterpieces included fresh coconut cake, Christmas fruit cakes, Lizzies, and most especially fudge. She was an impeccable housekeeper and seamstress, and always took time to watch the trains or drive the mountain dirt roads. She helped Flicka raise her 6 beagle puppies and Patches raise her 4 kittens. Nancy also loved to “playing and digging in the dirt”; crab grass never had a chance! Growing up, her father had a big garden behind their home. For years on Robin Hood Road, Nancy had both a flower garden and vegetable garden. At Givens, she only had a front yard flower area. Nancy’s greatest accomplishment was having and raising her three fantastic children, Frederick Thomas Greene (wife Sheryl and children Michael (wife Natalie) and Natalie (husband Dan and children Nora and Ella)), Edward Eugene Greene (wife Robin and children Robbie and Katie (husband Taylor and child Miles)), and Diana Darr Greene Corbett. She will be missed by all. A Celebration of Life will be held at 2:00 pm on Sunday, June 2, 2019 at Central United Methodist Church, 27 Church Street Asheville, NC 28801. The family will receive friends in the Fellowship Hall after the Celebration. In lieu of flowers, donations can be made to the John F. Keever, Jr. Solace Center, P.O. Box 5779, Asheville, NC 28813.

Nancy Darr Conrad Greene eased into eternity on Thursday, May 30, 2019, while holding hands with her husband of 70 years, William (Willie) E. Greene. Nancy was born on June 10, 1927 in her two-story brick home at 711 N. Fulton Street in Salisbury,... View Obituary & Service Information

The family of Mrs. Nancy Darr Greene created this Life Tributes page to make it easy to share your memories.

Nancy Darr Conrad Greene eased into eternity on Thursday, May...

Send flowers to the Greene family.