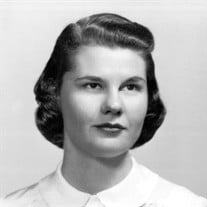 Mary Nancy Barber Patton, 94, of Asheville, NC, passed away on Friday, August 17, 2018. Mrs. Patton was a lifelong resident of the Asheville area, the daughter of Frank A. Barber and Mary Virginia Peabody Barber. She graduated from Duke University with a Bachelor of Arts degree in English Literature. In 1951 she married Francis McLeod Patton, also of Asheville. He preceded her in death after 62 years of marriage. Mrs. Patton was a lifelong member of Trinity Episcopal Church in Asheville where she served on the altar guild, several terms on the vestry, as a member of the Order of the Daughters of the King and as a volunteer receptionist as recently as 2018. She was a passionate advocate for the helpless and vulnerable, volunteering for many years at Swannanoa Valley Christian Ministry, and serving as a Guardian Ad Litem for Buncombe County. Mrs. Patton loved reading, word games and card games. She did the crossword puzzle daily, and (successfully) kept her mind sharp by reciting the alphabet backwards. She was the queen of double solitaire, dabbled in Mah Jong and routinely spanked all and sundry - except grandson Morgan - at gin rummy. She was an avid Duke fan who enjoyed ribbing her Carolina- grad doctors and pharmacists and annoying her NC State and Carolina family members. She was a charter member of the Patton-Bankston-Schneider-Chappell NCAA Basketball Tournament Challenge, three times winning the family trophy. She and her husband, Mac, spent countless hours picnicking along the Blue Ridge Parkway and traipsing all over the Smokies. They traveled widely - from Scotland to the Canary Islands, South America and all over the US. They also pranked each other every April Fool’s Day. She is preceded in death by her parents and husband, and by her brothers: James Barber, Dr John Barber, Col. Robert K Barber, and sister, Virginia Sisk. A devoted mother and grandmother, she is survived by her four children; Mary Ann Patton Schneider (Peter), Penelope Bankston (Bobby), Katie Chappell, and McLeod Patton (Laura); seven grandchildren; Katie Strawn (Jake), Moira Schneider (Jaren), Evan Schneider (Sahar), Paul Schneider, Jacob Schneider, Miles Chappell (Susan) and Morgan Chappell. In all her words and actions, Nancy Patton forever exemplified, “Life is short. We don't have much time to gladden the hearts of those who walk this way with us. So, be swift to love and make haste to be kind.” (Henri-Frederic Amiel) A memorial service will be held on September 21, 2018 11:00 am, at Trinity Episcopal Church, 60 Church St, Asheville, NC 28801. In lieu of flowers, memorials may be made to the Swannanoa Valley Christian Ministry (101 N Ridgeway Ave, Black Mountain, NC 28711) or to the Mac and Nancy Patton Fund at Trinity Episcopal Church (established to fund Trinity's Outreach projects).

Mary Nancy Barber Patton, 94, of Asheville, NC, passed away on Friday, August 17, 2018. Mrs. Patton was a lifelong resident of the Asheville area, the daughter of Frank A. Barber and Mary Virginia Peabody Barber. She graduated from Duke University... View Obituary & Service Information

The family of Mrs. Nancy Barber Patton created this Life Tributes page to make it easy to share your memories.

Mary Nancy Barber Patton, 94, of Asheville, NC, passed away on...

Send flowers to the Patton family.