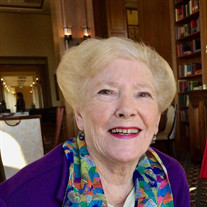 Patricia Ann Bell Ramsey, 90, of Asheville, passed away on Monday November 8, 2021 at Brooks-Howell Home. An Asheville native, she was born on March 17, 1931 and was the daughter of the late Mary Edith Spielman Bell and William Harold Bell. On May 31, 1952, she married the love of her life, Hiden Ramsey, who preceded her in death in 1991. Also preceding her in death were two brothers, C. Ritchie Bell and W. David Bell both of Chapel Hill. Pat was a graduate of The Plonk School of Creative Arts on Charlotte St. in Asheville and later attended West Hampton College in Richmond VA. In her youth she was a member of The Terpsichorean Club, The Old Maids Club and the Asheville Junior assembly. Later in life she was a member of The Junior League of Asheville. Pat had one goal in life, to be a good mother and she surely succeeded in that. But along that path, she lived a full, accomplished and fun life. She loved to travel and after Hiden’s death she and friend, Loretta Warlick, set off on numerous adventures around the world. Pat was a woman of many and varied talents. An accomplished artist she painted on everything from china to a mural on the closet doors in the guest room. But it was traditional watercolors where she excelled. Many of us are blessed to have her art hanging in our homes. In addition to her own art she was a supporter of the Asheville Art Museum. When a fireplace was added to the family room, her desire for a stone facade had her bringing back river rocks from the family property in Reems Creek. Always the creative, she alone built the stone wall and hearth much to the amazement and admiration of all. Pat and Hiden were known for their over-the-top parties which, at one such event, involved bringing in farm animals. Hence her passion for animals of any ilk. There were always animals in the family home from dogs, cats, tadpoles, a great horned toad, bunnies to pet monkeys. Not that having three young boys wasn’t enough to deal with, it was off to the animal shelter and home with three mutts—one for each! She was also an animal rehabilitator so something was always being cared for, even a bear cub at one point. In her later days she gained great joy in watching all her critters come visit the feeding box at the kitchen window as well as the bird feeder outside her bedroom window. She was a longtime volunteer at the WNC Nature Center. When she wasn’t dealing with 3 boys, numerous pets, building walls, rehabbing injured animals or painting, Pat worked as the Welcome Wagon hostess for a number of years. You can be sure that newcomers to Asheville were impressed with her gracious and effervescent personality. A side benefit… there was always a brand new Camaro in the driveway (thanks Bob Hunter). After a stint at a young startup, The Asheville News, she embarked on a 20-year career with Standard Paper in Asheville as a salesperson/designer for many businesses in Asheville bringing the concept of “matched packaging” to her customers. Pat cherished her family and friends, was loved by all who knew her, and her kind heart and sense of humor will certainly be missed. She leaves to honor her memory three sons, David Hiden Ramsey of Charlotte (Catherine Russell); Graham Leftwich Ramsey (Leslie Keller) of Asheville; Patrick Martin Ramsey of Weaverville; grandchildren, Paige Ramsey; Graham Ramsey Jr.; Kelly Bodman Willis (Scott) and Christopher Bodman (Hannah) and great-grandchildren Barrett and Zoey Willis. A graveside service will honor the life of Pat Ramsey on Sunday November14th at 2:00pm in Riverside Cemetery, 53 Birch Street, Asheville, NC 28801. In keeping with her love of all animals, memorials made in her name to the WNC Nature Center would make her very happy. https://wildwnc.org/donate/

Patricia Ann Bell Ramsey, 90, of Asheville, passed away on Monday November 8, 2021 at Brooks-Howell Home. An Asheville native, she was born on March 17, 1931 and was the daughter of the late Mary Edith Spielman Bell and William Harold Bell. On... View Obituary & Service Information

Patricia Ann Bell Ramsey, 90, of Asheville, passed away on Monday...