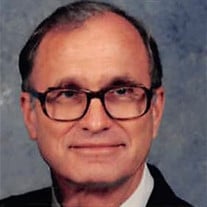 Dr. Philip Alfred Walker, 96, of Asheville died Tuesday, May 31, 2016. He was born in 1919 in Winston-Salem, NC to the late Robert B. and Naomi W. Walker. He was also preceded in death by his wife of over 50 years, Grace E. Walker; his son, Philip A. “Pete” Walker, Jr.; his sisters, Josephine W. Shaffner and Nancy W. Wooten and brothers, Robert H., David R. and John Seth Walker. He is survived by his children, Kelly Paul (Bryson), Elaine Potter (Annika) and Jenny Louise Davids (Scott); his grandchildren, Taylor, Betty, Maggie and Wesley Walker. John, Robert and Peter Davids and William and Nate Potter. He often said his family was his greatest treasure and this certainly would include his in-laws, nieces and nephews. His formal education includes A.B. at Chapel Hill as Phi Beta Kappa student, an M. A. from Emory University, a Ph.D. from Chapel Hill, and a year at the University of Paris as a Fullbright Scholar. Serving in the military four years during World War II, he was fortunate in not having been called for combat duty. The closest he came to combat was when he was sent to the Philippines in 1945 to the Division Artillery of the 6th Infantry, which was scheduled to play a major part in the invasion of Japan, with estimates of 30% casualties – (which, as you know, never took place). The troops were used instead to occupy the cities in Korea from which the Japanese had been evicted. His last military assignment was active mayor of a small seaport in southeast Korea. Dr. Walker was a professor at UNCA for 30 years, where he helped establish the much admired liberal arts curriculum and played a major role in organizing interdisciplinary Humanities Court which has come to have nationwide recognition. Serving for many years as Division chairman and Department head (history), Dr. Walker also played a major role in advocating for a colleague in a sex discriminations suit which was a turning point for better pay and equal opportunities for women throughout the UNC system. An active member of Grace Episcopal church, Dr. Walker served as Senior Warden, vestry member and Lay reader – among other things. As a lifelong music lover, he was a founding member (and baritone horn player) in the Asheville Community Band. He also served many years as board member and former president of the Asheville Chamber Music Series. He would certainly have wanted mention made here of his affection for and appreciation of the group of close friends, called the Sweat Hogs, who played handball together three times a week over the course of many, many years. Dr. Walker played his last game shortly after turning 90. A memorial service will be held 1:00 PM, Saturday, July 23, 2016 at Grace Episcopal Church, 871 Merrimon Avenue with The Reverend Gary Coffey officiating.

The family of Dr. Philip A. Walker created this Life Tributes page to make it easy to share your memories.

Send flowers to the Walker family.