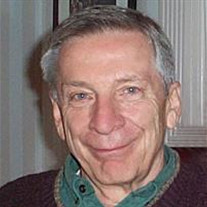 Phillip C. Broughton died on Friday, April 1st at the John F. Keever Solace Center in Asheville, NC. He was 85 years old. Born in Findlay, Ohio in 1930, he graduated from Bowling Green State University and the University of Michigan Law School and received the LLM degree from New York University. He served in the U. S. Marine Corps as a Lieutenant with the Third and First Marine Divisions in Japan and Korea. In 1957, following law school, he joined the New York law firm of Thacher Proffitt & Wood, becoming a partner in 1963 and Chairman of the Executive Committee and Managing Partner until retiring and becoming counsel to the firm in 1992. He lived for many years in Basking Ridge, New Jersey where he was a member and Chairman of the Bernards Township Planning Board, a Trustee and Ruling Elder of the Basking Ridge Presbyterian Church and Trustee of Kent Place School in Summit, New Jersey, his daughters’ secondary school. He later resided in New York City and his vacation home in Old Lyme, Connecticut. In Old Lyme he served as a Trustee of the Florence Griswold Museum and the co-Chairman of the Lyme Academy College of Fine Arts. Phillip moved to Asheville in 1993 and served on numerous boards, including the Asheville Art Museum, where he served for many years as Chairman, the North Carolina Museum of Art, the United Way of Asheville and Buncombe County and CooperRiis. At his death he was Chairman of the Board of The Midgard Foundation, which he had served as a Director since its founding in 1965 and as its President since 1987. He also served as co-Trustee, with JP Morgan Private Bank, of the Achilles Memorial Fund created by his client Frances Mulhall Achilles. He is survived by his long time partner and spouse, David L. Smith of Asheville, by his children, Margaret Crockett and her husband Chuck of Andover, Massachusetts, Phillip Jr. and his wife Karen of Asheville and Kathmandu, Nepal, Anne Duvall and Bob Wagner of St. Davids, PA and Naples, Florida and Elizabeth Cox and her husband Jonathan of Lakewood, Colorado and eleven grandchildren, James, Sarah, Emma, Hannah, Rebecca, Chas, Brenton, William, Sam, Erin and Brian and his beloved Labs, Riley and Lily. His lovely sister, Linda Ross of Owensboro, Kentucky and Bryson City, North Carolina also survives. Phillip was predeceased by his parents, Marian Pierson Broughton Byrnes and Harold Charles Broughton and his beloved brother, Richard Frazier Broughton. Phillip was fond of good reading, history, prose and poetry, classical music and opera, architecture and design and the daily New York Times in print. He admits to collecting too many hardcover books and good bottles of red wine. He was particularly devoted to his spouse and partner and his children and grandchildren whose many accomplishments charmed his life. A Memorial Service in his honor will be held on Saturday, April 16th at 3 PM at the Asheville Art Museum. Memorial donations may be made to the Asheville Art Museum, the Asheville Humane Society or CarePartners Hospice.

The family of Mr. Phillip C. Broughton created this Life Tributes page to make it easy to share your memories.

Send flowers to the Broughton family.