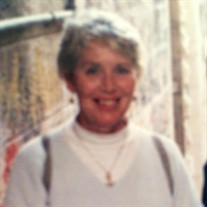 Phyllis Lamona McKnight Blome, 76, died peacefully in her sleep at home on April 7, 2017. Born in Southport, N.C., on October 1, 1940, Phyllis grew up in the Detroit suburb of Grosse Pointe, Mich. She attended the University of Michigan in Ann Arbor. She was a flight attendant for TWA airlines and also worked for the Chrysler Corporation until she married. Her loving husband of 50 years, Donald Armin Blome, preceded her in death in 2014. She leaves behind her son Donald and his wife Debbie Blome, of Vienna, Va., and her son Erik and his wife Charlotte Blome of Crystal Lake, Ill., as well as five grandchildren: Sarah, Nicholas, and Carl of Vienna, and Max and Noah of Crystal Lake. She is also survived by siblings Carol (and Tom) Langridge, of Maricopa, Ariz., Bill (and Kathy) Moriarty of St. Clair Shores, Mich., and Jim (and Patti) Moriarty of Clinton Twp., Mich.; and cousin Harold Gore from Leland, N.C. Phyllis and Don raised their family in the Chicago area, where Phyllis supported her husband’s work at his graphic design firm. In addition to her administrative help with catalog photo shoots and travel planning, Phyllis was a devoted mother, PTA member, avid tennis player, expert knitter, gourmet cook, and voracious reader. She and Don shared a passion for traveling. She took up tennis as an adult but quickly became an ace on their club’s ladies singles team. Her interest in knitting was lifelong and she was a true artist. She continued knitting beautiful sweaters, hats, and blankets for all her friends and family until just recently. Phyllis and Don moved to North Carolina in 1993, living in Wilmington for a few years before settling in Asheville. Their mountainside home was a source of comfort and pleasure to Phyllis, filled as it was with her husband’s paintings, her son’s sculpture, mementos of their travels, photos of family and friends, and all the books she loved reading. Her family would like to extend their heartfelt thanks to all of Phyllis’s close friends in Asheville for their love and attention over the years. Burial and memorial service will take place this summer in Pointe-aux-Pins, Michigan, on Bois Blanc Island, where Phyllis and Don spent nearly every summer.

Phyllis Lamona McKnight Blome, 76, died peacefully in her sleep at home on April 7, 2017. Born in Southport, N.C., on October 1, 1940, Phyllis grew up in the Detroit suburb of Grosse Pointe, Mich. She attended the University of Michigan in... View Obituary & Service Information

The family of Mrs. Phyllis McKnight Grissett Blome created this Life Tributes page to make it easy to share your memories.

Send flowers to the Blome family.