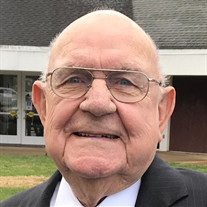 Rayburn Holman Dean, 89, of Asheville, died Saturday, August 17, 2019 at Carepartners Solace Center following a short period of declining health. Born Nov. 17, 1929 in Springfield, TN, Ray was the son of the late Thomas Wilson and Walcye King Dean. He was also preceded in death by his brother, Bill Dean of Memphis,TN and sisters, Mary Kathryn Shetter of Middletown, OH and Louise Hollingsworth of Springfield, TN. Following his graduation from Springfield High School in Robertson County, TN, Ray worked for the FBI under J. Edgar Hoover in Washington, D.C as a fingerprint specialist. He was a veteran of the Korean Conflict, serving in military intelligence from 1948-1952 in the U.S. Air Force in Japan. He graduated from the University of Tennessee with a BS Degree in Chemical Engineering/Metallurgy in 1956. Ray began his career with American ENKA Company in Morristown, TN in 1956, transferring to Enka, NC in 1971, where he served as Vice President for Manufacturing, Research and Engineering. After a corporate buy-out by BASF Chemical, Ray continued his 38+ year career with the same company, retiring as BASF Group Vice-President in 1994. Ray is survived by his wife of 65 years, Martha Mynatt Dean; his daughter and son-in-law, Marcia Dean Onieal and Jimmy Lamm of Waynesville, NC; his son and daughter-in-law, Walter Wilson Dean and Janel Hall Norcom of Milton, GA; five grandchildren, Meredith Dean of Charlotte, NC and Harrison Dean of Milton, GA, and Miles, Bianca, and Grant Norcom of Milton GA; a brother and sister-in-law, Dick and Linda Dean of Springfield, TN; and many beloved nieces, nephews and extended family members. Ray was a member and ruling elder of Grace Covenant Presbyterian Church, where over the course of his 48 years of membership, he taught Sunday School, served as youth advisor and chaired all sessional committees and a capital building campaign, which saw the first major expansion of the church’s sanctuary and organ. He served various capacities in many governing bodies of the PCUSA including Moderator of Holston and Asheville Presbyteries, Trustee of Union Theological Seminary in Richmond, Va., Director of Annuities and Relief Board (PCUS), Board of Visitors of St. Andrews Presbyterian College, and Commissioner to the General Assembly (PCUS). He previously was active in similar capacities with the First Presbyterian Church of Morristown, TN. Ray was a loyal and dedicated community volunteer, serving throughout his professional career and retirement primarily in health & human services organizations. He was trustee and president of the Daniel Boone Council, BSA, where he was also honored with the Silver Beaver Award. He was a member of the Juliet Gordon Low Society and Strategic Planning Board for the Pisgah Council, Girl Scouts of America. He was a Board Director, Chair of the General Campaign and member of the Human Services Council for United Way of Asheville & Buncombe County. He served on the boards of the Asheville Chamber of Commerce, Western Carolina Better Business Bureau, UNCA Foundation, Mountain Health Services Corporation, Mountain Area Hospice, Sisters of Mercy Foundation of NC, and Arts Alliance of Asheville. Ray also chaired, co-led, or participated in community capital campaigns for local agencies including: United Way, ABCCM, Mountain Area Hospice, YMCA, YWCA, St. Joseph’s Hospital & Hospital Foundation, Meals on Wheels and other non-profits. In more recent years, he was an active volunteer with United Way, Meals on Wheels, Room in the Inn, and various ministries of ABCCM. Professionally, Ray also served as trustee of the Textile Research Institute of Princeton University in New Jersey. In 1992, Ray was honored by the Asheville Chapter of NSFRE as their first Outstanding Philanthropist of the Year, and in 1996, he received United Way’s Award for Lifetime Dedication to Philanthropy and Volunteerism. Ray valued his church and community and helping others, but above all was dedicated to taking care of his friends and ever growing family. His heart was so large that his definition of family included many who may not have been related by blood, but who were related in spirit and in love. He enjoyed nothing more than spending time with family and friends, be it via his many travels through all 50 states and 45 countries on five continents, or hosting those he loved over a good meal and conversation. He adored his wife, children and grandchildren and even his “grandimals”. He loved hiking, camping, and his morning crosswords; and he especially looked forward to the lively political and theological discussions with his weekly coffee buddies from GCPC and the “Y”. As he concluded in recent days, “Well gang…we’ve had a wonderful, wonderful life together; and who can ask for more than that?” A service of witness to the resurrection will be held at Grace Covenant Presbyterian Church, 789 Merrimon Avenue, Asheville on Saturday, September 7, 2019 at 1:00 p.m., the Rev. Marcia Mount Shoop officiating. There will be a reception immediately following the service in the Fellowship Hall, where friends may greet the family. Special thanks go to the medical professionals, staff and fellow patients at Davita Weaverville and Carepartners Solace Center for their support and the outstanding care Ray received, particularly over these last few weeks. In lieu of flowers, the family suggests that memorials be sent to: Habitat Aid Initiative, 6855 Shiloh Road East, Alpharetta, GA 30005, www.habitataid.org, or the Music Fund of Grace Covenant Presbyterian Church, 789 Merrimon Avenue, Asheville, NC 28804, www.gcpcusa.org. Morris Funeral Home is assisting the family and the online memorial is available at www.morrisfamilycaregroup.com

The family of Rayburn H. Dean created this Life Tributes page to make it easy to share your memories.

Send flowers to the Dean family.