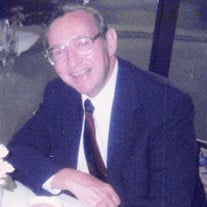 Raymond M. Browne, 86, of Asheville, died on Monday, June 4, 2018. A native of Memphis, TN Raymond was born on August 20, 1931 to the late William Fleming Browne, Sr. and Lucille Maier Browne. In addition to his parents he was also preceded in death by his brother, William Fleming Browne, Jr. He attended high school at Georgia Military Academy in College Park, GA. He attended Spring Hill College in Mobile, AL before going on to the University of Tennessee. His time there was interrupted by the call to serve his country by enlisting in the United States Army. Upon his honorable discharge he returned to the University of Tennessee to finish his degree. Raymond went on to learn the lumber business from his father and later went into the sales of corrugated products. He faithfully serviced all of Western North Carolina and the South Carolina Upstate for most of his life, processing his finial sale just this past Friday. Raymond was an active member of St. Eugene Catholic Church, where he was head usher for 40 years and was a 4th Degree member of the Knights of Columbus. He enjoyed bowling and was an avid golfer, playing courses all over WNC and in the low country of South Carolina, always comparing notes about his places to play. He is survived by his loving wife of 46 years, Brenda Browne; his son, Michael Raymond Browne and his wife, Monica, of Charlotte; his two grandchildren, Nathaniel Raymond Browne and Abigail Catherine Browne of the home; his sister-in-law, Marilyn Browne and many nieces and nephews. A funeral Mass will be celebrated at 1:00PM on Friday, June 8, 2018 at St. Eugene Roman Catholic Church, 72 Culvern Street, with Fr. Patrick Cahill celebrating. Burial will follow at Riverside Cemetery. The family will receive friends from 5:00Pm until 7:00PM on Thursday, June 7, 2018 at Morris Funeral Home, 304 Merrimon Avenue.

Raymond M. Browne, 86, of Asheville, died on Monday, June 4, 2018. A native of Memphis, TN Raymond was born on August 20, 1931 to the late William Fleming Browne, Sr. and Lucille Maier Browne. In addition to his parents he was also preceded... View Obituary & Service Information

The family of Raymond Browne created this Life Tributes page to make it easy to share your memories.

Send flowers to the Browne family.