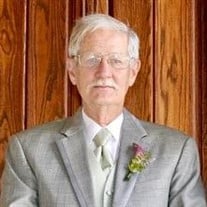 Richard “Dick” Edgar Burdette, 83, passed away peacefully at J. F. Keever, Jr. Solace Center on December 6, 2019. He was proceeded in death by his wife of 57 years, Janet Brock Burdette. Dick was born in Spartanburg, South Carolina and was the son of James Wesley Burdette and Ora Whitten Burdette. He spent his early childhood in South Carolina and Georgia. He attended Clemson University and graduated in 1958. He was commissioned in the United States Army after graduation and spent two years Fort Sam Houston in San Antonio, Texas. He later joined the Army Reserves and retired as a Lieutenant Colonel. Following his commission in the Army, he moved to Charlotte, NC where he met his future wife. They moved to Asheville, NC in 1969 where Dick joined the R. Stanford Webb insurance agency. He worked for the agency for 37 years during which time he served as President during the latter part of his tenure. He and Janet raised all three of their children in Asheville and were active in the community. Dick was an avid fan of his beloved Clemson Tigers and spent many years going to football, baseball, soccer and basketball games. He was happy to be able to watch his Tigers win two more national football championships in 2016 and 2018. He also enjoyed model railroading, reading, traveling and bird watching. He is survived by his daughter Sandra Burdette; his son Mark Burdette and daughter-in-law Tanya Burdette; son Dave “Coach” Burdette and daughter-in-law Julia Burdette and grandsons Wesley and Andrew Burdette – all of Asheville, NC. Dick is also survived by his niece Pam Lawson and her husband Billy and their children Brock Lawson and Jessie Lawson; nephew Bill Worling and his wife Sira and his daughters Kimberly Kiss and Lindsey Worling; and nephew Steve Worling and his wife Christine; niece Dana Brock; and nephew Bob Brock. He will be missed by many friends who he loved very dearly. A celebration of life will be held at a later date. In lieu of flowers, donations to can be made to Asheville Chapter of the National Railway Historical Society, P.O. Box 153, Asheville, NC 28802-0153 or WNC Model Railroaders, 69 Ballantree Drive, Asheville, NC 28803.

The family of Richard Edgar Burdette created this Life Tributes page to make it easy to share your memories.

Send flowers to the Burdette family.