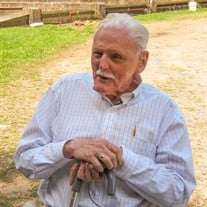 Pioneer in the Aquaculture Industry Richard Gundry Jennings, Jr., died on August 7, 2017, at his residence in Asheville, NC. He celebrated his 93rd birthday five days prior, with his wife of sixty-six years, and their three children. Born on August 2, 1924, Jennings hailed from Pittsburgh, Pennsylvania. His parents were Sara Chaplin Jennings and Richard Gundry Jennings, Sr., both of Pittsburgh. He had a secure future in the oil business with his family, but instead, he chose to move south, to untamed land which his grandfather had purchased over his lifetime. That land spanned about 30,000 acres at one time, from Jackson to Transylvania Counties. Jennings’ father, Richard, Sr., warned, “You’ll starve if you choose this path.” He spent the next seven decades creating an unparalled legacy for his family and countless others. Jennings attended Yale University, interrupted by World War II, where he served in the Philippines with the United States Army. After the war ended, he made his way south to Cashiers, NC, where he started a mink farm in 1948, followed by a trout farm. He and Frances Clark, of Asheville, raised their three children there and carved out a significant niche within this remote Appalachian community. In the early 50’s and 60’s, Jennings was instrumental in building a community Center in the heart of Cashiers, where folks could meet, share ideas, and consider different educational paths for their children. He was considered a trustworthy friend by all who knew him. He was also known for his prowess at square dance calling. In the 60’s, he and Frances made their way to Asheville, where they have remained ever since. Over the next three decades, Jennings served on numerous boards and was known for his less than complacent personality when it came to issues in which he believed. He made a difference in whatever he tackled. He looked back most fondly upon his years on the Warren Wilson Board, where he served for twenty years. During his life in Asheville, he expanded his trout business to include a large rearing facility in Haywood County, and today, incorporating a new state-of-the-art processing facility in the heart of Waynesville. He defied the traditional thoughts and process of fish farming and was never afraid to step outside of his comfort zone. He stood up for his principles, ideals, and friends, regardless of consequences. Perhaps Jennings’ greatest legacy was his grandfather’s property in Cashiers, which he protected and preserved over his lifetime, making sure that he could pass it along to his children. That he did, establishing a very unique mountain community, unlike any other. Jennings was able to go visit his property in Cashiers, known as Lonesome Valley, not long before his death, at which time he was heard to say, “I believe all your ancestors are looking down proudly over all you’ve accomplished.” Even at ninety, Jennings still drove out to the farm on a regular basis, giving good counsel when he deemed it appropriate. He enjoyed watching the fruits of all his labors coming to pass. Jennings is survived by his wife, Frances Clark Jennings, their three children, Richard Gundry Jennings, III (Dickie), and his wife, Eli Corbin Jennings of Asheville, NC, Binford Virginia Jennings of Asheville, NC, Sara Chaplin Hudson (Sally), and her husband, Charles Edward Hudson of Waynesville, NC. He is also survived by nine grandchildren: Wesley Eason, Benjamin Eason and his wife Anna Eason, Sara Hughes (Katie) and her husband Clay Hughes, Richard Jennings IV, and his wife Sarah, of Cashiers, NC, Sarah Kowalski and her husband, Jim, of Savannah, Corbin Jennings, of Washington, DC, Rachael Jennings, of Washington, DC, Nicholas Sievers of Athens, Ohio and Timothy Sievers of Cincinnati, Ohio. In addition, there are seven great-grandchildren, Taylor, Mollie, and Emory Eason, Edward and Richard Jennings V, Grayson and Crosby Kowalski and Henry Hughes. Generous by nature, he encouraged graciousness toward community, friends and family. We will miss his guidance, his bigger-than-life presence, his remarkable wit and never-ceasing sense of humor. Services will be held Saturday, August 12, 2017, at 3:00 PM, at Trinity Episcopal Church, followed by the interment at Calvary Episcopal Church. And following, the family invites everyone to join them in celebrating the “ Life Well Lived” of Richard Jennings at the Biltmore Town Hall. In lieu of flowers, memorials may be made to Children's Welfare League, PO Box 15425, Asheville, NC 28813. Follow this link, www.cwl-asheville.org to go directly to their homepage and then click on "Donate".

Pioneer in the Aquaculture Industry Richard Gundry Jennings, Jr., died on August 7, 2017, at his residence in Asheville, NC. He celebrated his 93rd birthday five days prior, with his wife of sixty-six years, and their three children. Born... View Obituary & Service Information

The family of Mr. Richard Gundry Jennings, Jr created this Life Tributes page to make it easy to share your memories.

Pioneer in the Aquaculture Industry