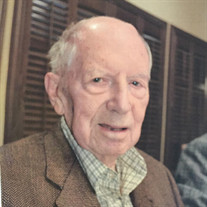 Mr. Luchsinger was born November 22, 1917 in Moline, Illinois to the late Jacob Charles Luchsinger and Florence Anna Carlson Luchsinger. He graduated from high school and started working for the John Deere Company from 1937 to 1942. He was a veteran of WWII, enlisting in the US Army on February 14, 1942 and serving in the Sixth Army, 81st Unit in Chicago keeping daily records of troops and using rudimentary computers to match civilian skills to military staffing demands. He met his lifelong sweetheart Margaret Jeannette Holley while in Chicago and they were married from 1944 until her passing in 1999. After the war, Mr. Luchsinger went to New York City (NYC) to work for IBM. He was a lifelong employee of with IBM from 1944 until 1985 mostly in NYC. In the mid 60s the family settled in Stamford Connecticut from Westbury NY. In the early 1970s the family moved to Buenos Aires, Argentina and then Rio de Janeiro in Brazil. The family re-settled in Stamford CT after returning from Latin America. He thrived in all of the different cultures he experienced around the world and made friends everywhere he went. On his 100th birthday, when asked what he had learned in his life, his immediate response was, “Always make friends, never enemies”. This leaning continued to follow him to retirement in Asheville where he continued to enrich his life with friends at Arden Woods and as the secretary of the NC Carver’s club. He became an accomplished wood carver and won several awards including having a piece at the NC Arboretum. He was always a supporter of original artwork and loved the art community of Asheville. If it was sports, he enjoyed it (especially Duke basketball) ! He was also a voracious reader and a sharp observer of politics, business and people. He was active on church building committees, and homeowner associations. He was an astute Scrabble player and made each day count as an opportunity to learn something new. In addition to his parents and his wife, he is predeceased by his brothers Chuck, and Jack Luchsinger and his sister Velma Stanley. Mr. Luchsinger is survived by daughter Julie Carlson and her husband Fred of Fairfield Glade, TN and son Ted Luchsinger and his wife Deborah White of Fairfield, CT. He is also survived by four grandchildren, Amanda Walsh (Brendan), Michael Luchsinger, Jacqueline W Luchsinger and Brian W Luchsinger; two great grandchildren Landon Luchsinger and Andrea Walsh. Marge’s brother Jay Holley, many nephews and nieces and friends, will also miss him. A small memorial is planned at Ardenwoods, 2400 Appalachian Blvd. in Arden N.C.on Saturday Feb.2 at 2:30pm EST. He supported MemoryCare of Asheville for the guidance he got for his wife. The family requests that you remember Mr. Luchsinger with a donation in his name to MemoryCare of Asheville. https://interland3.donorperfect.net/weblink/weblink.aspx?name=E334990&id=6

Mr. Luchsinger was born November 22, 1917 in Moline, Illinois to the late Jacob Charles Luchsinger and Florence Anna Carlson Luchsinger. He graduated from high school and started working for the John Deere Company from 1937 to 1942. He was a... View Obituary & Service Information

The family of Richard Allen Luchsinger created this Life Tributes page to make it easy to share your memories.

Send flowers to the Luchsinger family.