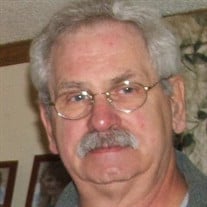 Robert Lee Anderson, 72, of Candler, lost his battle with cancer on Friday, December 20, 2019, at Pisgah Manor in Candler. He was born in 1947 in Chicago, IL, the son of Lee William and Gertrude Angela (Lukow) Anderson. Bob grew up in the suburbs of Chicago and became a die-hard Cubs fan, as anyone who knew him can attest to. He attended West Leyden High School, until he enlisted in the Navy in 1964. Hearing him talk about his Navy years, you just knew it was the favorite time of his life, making many friendships that have lasted through the years. He was stationed many places, including Memphis, TN; Omaha, NB; and the Pentagon, as well as two stints in Hawaii. He retired from the Navy in 1987, and moved to Asheville, saying he’d done his 22 years, 8 months, and 18 days of service, and that was enough. Through these "retirement" years, Bob found employment at St. Joseph’s Hospital, and was there through the transition to Mission Hospital. He managed the hospital’s print shop, and was known to all as “Print Shop Bob,” the guy to go to when you needed a job done right and done fast. He finally retired from the hospital in 2015, after 28 years of faithful service. Bob is preceded in death by his parents, Lee & Gert Anderson; and is survived by his wife of 24 years, Valerie (Ward) Anderson; his brother, William Anderson of Plainfield, IL; sisters Arlene Leedom of Pahrump, NV; Karen Karlovitz of Bloomingdale, IL; Gail Fox of Gilbert, AZ; and Diane Minnice of Palatine, IL; as well as several nieces and nephews. A celebration of Bob's life will be held at 1:00 PM in the chapel of Morris Funeral & Cremation Care, 304 Merrimon Ave., on Saturday, January 18, 2020 with Rev. Kelly Crissman officiating. Interment will immediately follow at Refuge Baptist Church Cemetery, 27 Oleta Road, Hendersonville, NC 28792. The family would like to thank the entire staff at Pisgah Manor and commend them for the excellent care they gave Bob during his last few months. Their kindness and compassion made a hard time much easier and will never be forgotten.

Robert Lee Anderson, 72, of Candler, lost his battle with cancer on Friday, December 20, 2019, at Pisgah Manor in Candler. He was born in 1947 in Chicago, IL, the son of Lee William and Gertrude Angela (Lukow) Anderson. Bob grew up in the suburbs... View Obituary & Service Information

The family of Robert Lee Anderson created this Life Tributes page to make it easy to share your memories.

Robert Lee Anderson, 72, of Candler, lost his battle with cancer...

Send flowers to the Anderson family.