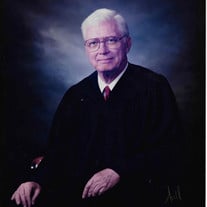 Robert Dobbins Lewis April 19, 1929 – January 4, 2018 The Honorable Robert Dobbins Lewis died at the North Carolina State Veterans Home on January 4, 2018. An Asheville native, Bob dedicated the majority of his life to public service for the State of North Carolina as a Resident Superior Court Judge for the 28th Judicial District, Buncombe County, serving 21 years on the bench prior to retirement, and 17 of those years as Senior Resident. Bob graduated from Asheville’s Lee Edwards High School, and obtained a Bachelor’s degree from Duke University in 1951. He then served 2 years as an officer in the United States Navy, after which he obtained a law degree from the University Of North Carolina School Of Law in 1956. Bob then returned to Asheville and entered private practice until becoming Solicitor for Buncombe County from 1967-1970, and District Attorney for Buncombe County from 1971-1974. Thereafter, he rode North Carolina’s western 4th Division circuit as Superior Court Judge, regularly presiding over cases from Murphy to Boone to Charlotte, as well as taking assignments across the Old North State. His many accomplishments include serving as President of the North Carolina Conference of Superior Court Judges, member of the North Carolina Judicial Standards Commission, delegate for North Carolina to the American Bar Association, member of the North Carolina Dispute Resolution Commission, and Vice President of the North Carolina Bar Association. In 2012, the former Chief Justice of the Supreme Court of North Carolina, Sarah Parker, presented him the Order of the Long Leaf Pine on behalf of the Governor, recognizing Judge Lewis for having a proven record of extraordinary service to the State of North Carolina. Bob is preceded in death by his parents, Walter Duncan Lewis, Sr. and Corinne “Jane” Dobbins Lewis, as well as many aunts and uncles. He is survived by: his devoted wife Kay Plemmons Lewis; sons Robert Gregory Lewis (Julie) and Mark Alexander Lewis (Libby); grandchildren Meredith Irene Lewis, Eliza Craig Lewis, and Ethan Gregory Lewis; brother, Walter Duncan Lewis, Jr.; as well as extended family. The family is being assisted by Morris Funeral Home, 304 Merrimon Ave., and a memorial service will be held in the Sanctuary of First Baptist Church of Asheville at 2 p.m., Saturday, January 13, 2018. In lieu of flowers, the family encourages donations to Pisgah Legal Services and Eliada Home for Children.

The family of Mr. Robert "Judge" Dobbins Lewis created this Life Tributes page to make it easy to share your memories.

Send flowers to the Lewis family.