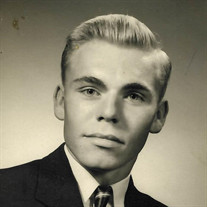 Rodger Lee Cripe, 83, of The Villages, FL passed away surrounded by his family at Mission Hospital in Asheville, NC, on Saturday, May 15, 2021. He was born to the late Russell D. Cripe and Maxine Cripe in South Bend, IN, on August 29, 1937. He graduated from Riley High School. He played football and his team became the Northern Indiana Champions. He attended Purdue University 1955-1959, where he earned his Bachelor’s degree in Agronomy/Agriculture. At Purdue, he was a part of the Agronomy Club, and Alpha Zeta Agriculture Honorary fraternity. Rodger proudly served in the U.S. Navy, where he was a Naval Officer LTJG on the USS Antietam CVS-36. After returning home from the military, he attended Indiana University South Bend 1973-1975, where he earned a MBA. His career spanned from working at, Torrington Company for six years, Syngenta Seed Corporation for 18 years, and as a NC realtor for four years. He retired in 2007 and moved from Greensboro, NC, to The Villages, FL. Rodger was an active member of Mount Pisgah UMC in Greensboro, and New Covenant UMC in The Villages, Florida. Throughout his service he was trustee, chairman, helped in long range planning and was president of UM men. In addition, Rodger was very active in his community. He was a member of the Lions Club, Mason Lodge 45 F&AM, Scottish Rite, Civitans (President) and Jaycees (VP). Rodger is preceded in death by his loving wife of 50 years, Janice Lee Shoemaker, and his six-year companion, Betty Ann Lusby. He is survived by his daughter, Carrie Menke; son, Scott Cripe and his wife, Shannon Cripe; grandson, Zachary Menke, and his granddaughters, Madeline Cripe and Maren Cripe. A graveside service with full Naval Military Honors, will be held on Friday June 4th, 2021 10:00am at St. Joseph Valley Memorial Park Chapel in South Bend, IN. Interment will follow immediately after the service. Morris Funeral & Cremation Care is serving the family, and Condolences may be made at www.morrisfamilycare.com.

Rodger Lee Cripe, 83, of The Villages, FL passed away surrounded by his family at Mission Hospital in Asheville, NC, on Saturday, May 15, 2021. He was born to the late Russell D. Cripe and Maxine Cripe in South Bend, IN, on August 29, 1937.... View Obituary & Service Information

The family of Rodger Lee Cripe created this Life Tributes page to make it easy to share your memories.

Rodger Lee Cripe, 83, of The Villages, FL passed away surrounded...

Send flowers to the Cripe family.