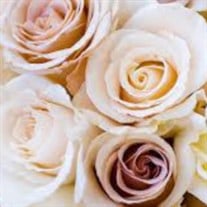 December 30, 1924 - November 9, 2021 Ruth Chicurel passed away on November 9, 2021, at her home in Chapel Hill, N.C., where she resided in the care of family members for the past seven years. She was 96 years old. Ruth was born in Munich, Germany, to parents Salomon and Ella Gilde Marx on December 30, 1924. With the exception of a brief time in Yugoslavia (1934-5), she spent her early years under the rule of the German NAZI regime. She and her parents fled Germany via Genoa, Italy, in December 1939, and arrived in America a short time later. Ruth attended George Washington High School in Washington Heights, New York. She was a member of the Math Club and Arista Society (Honors) and graduated in 1942. She attended night classes at the City College of New York while working at the offices of Paul and Stein Brothers importers in downtown Manhattan. In 1949, she met Isaac Nessim Chicurel, a research chemist. Ruth and Ike were married on May 24, 1952, in New York City. Over the next 12 years and several New Jersey locations, Ruth worked for Kellett Aircraft and Rutgers University in addition to raising a family of four children. In 1964, Ruth and Ike moved the entire family (now including Ruth’s mother) to Asheville, N.C. The family was involved in the civic community and in religious life at Congregation Beth-ha-Tephila. Ruth taught in the religious school and served on the board of the Temple Sisterhood. She was a board and lifetime member of the local chapter of Hadassah. Ruth retired from the Mountain Area Health Education Center (MAEHEC) in 1988. Ruth and Ike volunteered at The Health Adventure, Asheville Chamber of Commerce, College for Seniors at UNC-A, and Elderhostel. A stroke in late 2013 ended her ability for travel and volunteer work. After recovery in the spring of 2014, she made her final move to Chapel Hill, N.C. to live the rest of her life with her elder son and daughter-in-law, Bill and Cely Chicurel. Ruth Chicurel is preceded in death by her parents Salomon (1948) and Ella (1986), her brother Bernard (1932), and her beloved husband Isaac (2012), to whom she was married for 60 years. Ruth’s continued legacy includes four surviving children and their spouses: William Chicurel (Cely) of Chapel Hill, N.C., Steven Chicurel-Stein (Stephen Julius) of Oviedo, Fla., Sharon Hawkins (Stephen) of Pfafftown, N.C., and Deborah Conow (John) of Twin Peaks, Calif.; four grandchildren: Miriam Chicurel-Bayard (Dustin) of Chapel Hill, N.C., Matthew Chicurel (Sydney) of Chapel Hill, N.C., Christopher Conow of Los Angeles, Calif., and David Conow (Acacia Overoye) of Pleasant Grove, Utah; and, three great-grandchildren: Cypress, Willow, and Juniper Overono of Pleasant Grove, Utah. A graveside burial service is scheduled for Friday, November 12, 2021, at 2:00 p.m. at Riverside Cemetery in Asheville with Rabbi Batsheva Meieri officiating. In lieu of flowers, the family requests that any donations or memorials be given to The Isaac and Ruth Chicurel Community Education Fund at Congregation Beth-ha-Tephila in Asheville, N.C.

The family of Ruth Marx Chicurel created this Life Tributes page to make it easy to share your memories.