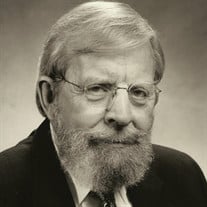 Samuel David Knisley (85) died April 10, 2019 at the John F. Keever Solace Center in Asheville, NC. He was born May 3, 1933, in Knox County, TN to Samuel David Knisley, Sr. and Sallie Henley Knisley. After graduating from Carson Newman College in 1955, David served three years in the U. S. Army before earning his MS and PhD degrees in history from the University of North Carolina. He married Frances Steadman in 1959, and they settled in western NC. After serving 38 years as a history professor and sometimes administrator at Mars Hill College in Mars Hill, NC, David retired in 1999 to enjoy his hobbies of motorcycling, glider flying, traveling and tinkering in his workshop. Preceded in death by his parents, David leaves his loving friend and former wife, Frances Knisley and their three children: Eric Knisley and Kim Andersen of Raleigh, NC; Amy Knisley and Ed Bowser of Asheville, NC; and Joel Knisley and Leah Hampton of Waynesville, NC, and one grandchild: Phoebe Knisley. He is survived by four siblings: Mary Jane Salyers and Bill Salyers of Hillsborough; NC, Jeff Knisley and Mary Knisley of Knoxville, TN; Ruth Todd and Gene Todd of Alto, GA; and John Knisley of Knoxville, TN, and a host of nieces, nephews, cousins, and friends. A service in memorial will be held on Saturday April 27, 2019 at 1:00pm, at Grace Episcopal Church, 871 Merrimon Avenue, Asheville, NC 28804. Memorial contributions may be made to Consider Haiti, P.O. Box 8515, Asheville, NC 28814-8515, https://www.considerhaiti.org/

The family of Samuel David Knisley created this Life Tributes page to make it easy to share your memories.

Send flowers to the Knisley family.