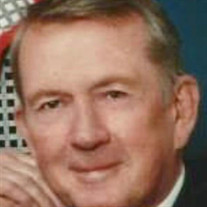 Samuel Robinson Sloan of Montreat, NC went to be with his Lord and Savior on Thursday May 21, 2020. Sam grew up in Gastonia, NC. He was the son of James Marshall Sloan, Jr. and Frances Robinson Sloan. He graduated from Davidson College where he was O.D.K., all conference on the golf team and a member of the Kappa Sigma fraternity. Sam served in Army Intelligence in the Big Red 1 at Fort Riley, Kansas and received the Army Commendation Medal for his service. He enjoyed a 39-year career with Bank of America and its predecessors. His positions included city executive in Durham, Greensboro and Charlotte as well as economic development officer. He led the task force for the Governor’s Business Council and was part of international trade missions with two governors. Sam was a man of great faith and he lived it daily. He attended Bible Study Fellowship and was in a men’s prayer group. He was an elder in the Presbyterian Church U.S.A., trustee of the Presbyterian Foundation, Chairman of the Board of the Mountain Retreat Association of Montreat, NC and board member for the Society for International Ministries. Sam’s community involvement was extensive. He was a board member of the North Carolina Biotechnology Center in the Research Triangle Park, board member for NC Center for Public Television Foundation and Chair of Durham’s United Way Campaign. He was Chair of the United Arts Council Fund Drive in Greensboro and Charlotte. Sam was Chairman of the Charlotte Housing Authority Scholarship Fund, for which he was named Man of the Year in Charlotte. He was Chairman of the Board of Discovery Place in Charlotte and Chairman of the Board for WDAV Classical Public Radio. Sam had a wonderful sense of humor that brought joy to all who knew him. He enjoyed fellowship with family and friends, golf, hiking, tennis and travel. His memberships in the Piedmont Club in Charlotte and the Golf Festival of North Carolina were very meaningful to him. Sam was devoted to his wife and children. He is survived by his wife, Suzanne Ross Sloan; children: Barrett Sloan Ranson of Charlotte and Samuel Ross Sloan (Martha) of Fairview; grandchildren: Robert Walker Ranson of New York, Marshall Ross Ranson of Charlotte, Grayson Masters Sloan of Spruce Pine and John Siler Sloan of Fairview; and sisters-in-law: Joanna Adams Sloan of Black Mountain and Marti Ross Franks of Richmond; and four nephews and two nieces. Sam is predeceased by his brother, Dr. James Marshall Sloan, III. In lieu of flowers the family requests memorials be sent to: Mountain Retreat Association, P.O. Box 969, Montreat, NC 28757, Montreat College, P.O. Box 1267, Montreat, NC 28757 or Christ Community Church, P.O. Box 279, Montreat, NC 28757. Morris Funeral and Cremation Care is serving the family and condolences may be sent to them at www.morrisfamilycare.com.

Samuel Robinson Sloan of Montreat, NC went to be with his Lord and Savior on Thursday May 21, 2020. Sam grew up in Gastonia, NC. He was the son of James Marshall Sloan, Jr. and Frances Robinson Sloan. He graduated from Davidson College where... View Obituary & Service Information

The family of Samuel Robinson Sloan created this Life Tributes page to make it easy to share your memories.

Samuel Robinson Sloan of Montreat, NC went to be with his Lord...

Send flowers to the Sloan family.