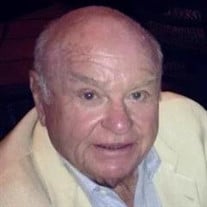 Sherman Adler died on Thursday, August 24 2017 at TrustBridge Hospice of Palm Beach County, Florida. Born October 23, 1929 in New York City, he was the son of David Adler and Martha Chazen Adler. He moved to Asheville, NC with his family as a young boy where he grew up in North Asheville. Sherman graduated from Asheville’s Lee H. Edwards High School in 1948 and then went on to earn a Bachelors Degree from the University of North Carolina, Chapel Hill, after which he served in the U. S. Army. His business career began in the mailroom of the National Broadcasting Company, New York City, with the intention of becoming a meaningful writer for television. In his words . . . “that fantasy lasted about two days.” In reality, it was the beginning of a network marketing/sales journey that lasted the better part of forty years with an interruption of a nine-year side trip working with the billionaire John D. MacArthur. Mr. MacArthur lured Mr. Adler away from NBC TV Network in New York, to make his vision for South Florida a reality. Teamed with Ivan Tors (the highly regarded outdoor TV programming Producer), and Mr. MacArthur (the financial backer) Sherman was able to build a prominent studio entity outside of Hollywood, specializing in outdoor Network Television programming. All of this resulted in four hours per week of prime time programming on all three TV networks, ABC, CBS and NBC: “Flipper,” “Gentle Ben,” “Daktari,” “Cowboy in Africa”, as well as a variety of network specials such as “Johnny Carson at Cypress Gardens, FL (NBC)”, “The Palm Beach Tennis Masters” (CBS)”, and “The Junior Miss Pageant” (NBC)”. In addition to his television responsibilities Mr. Adler became the Executive Assistant to Mr. MacArthur and helped in the planning and development of the cities of Palm Beach Gardens, Lake Park, and North Palm Beach. After Mr. MacArthur’s death, Mr. Adler returned to New York City and was associated with the CBS TV Network as a Vice President of Marketing and Promotion. Upon retirement Mr. Adler moved back to Palm Beach County where he has been active in civic and cultural affairs. As a Master Gardener, he founded and created the annual “Palm Beach Tropical Flower Show” in connection with the Palm Beach Garden Club. Another promotion was the “Green Market” (farmers’ market) in downtown West Palm Beach. He has served on a number of national, regional, and local task forces and boards of directors, i.e. Past Mayor Nancy Graham’s Task Force on the Downtown of West Palm Beach, the Florida Council of 100, and the National Board of Directors of the American Horticultural Society. In addition he also served as Chairman of President and Mrs. Clinton’s Task Force to create a “National Children’s Garden” at the White House. In addition to all of his civic and cultural involvement, he founded a consulting company, Image Engineering, and again became a consultant in the fields of marketing and promotion. During the latter part of his life he was a consultant to the City of Palm Beach Gardens helping to promote growth and development of this beautiful area. Mr. Adler is survived by his son, Jonathan and his wife, Allison; a grandson, Gavin, of Fort Lauderdale, FL; a sister, Carmel Adler Malkin, of Stamford, CT; a niece, Melissa Malkin of Los Angeles, CA; a nephew, Jonathan Malkin and his wife Philippa Feigen of Connecticut and several great-nieces and nephews. A graveside service will be held at 3:00 PM on Sunday, August 27, 2017 at Lou Pollock Cemetery, Louisiana, Ave, Asheville with Rabbi Wolff Alterman officiating.

Sherman Adler died on Thursday, August 24 2017 at TrustBridge Hospice of Palm Beach County, Florida. Born October 23, 1929 in New York City, he was the son of David Adler and Martha Chazen Adler. He moved to Asheville, NC with his family as... View Obituary & Service Information

The family of Sherman Adler created this Life Tributes page to make it easy to share your memories.