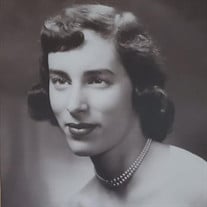 Sherry Lipinsky passed away peacefully at home September 11, 2020 following a long decline in health. She was born at Mercy Hospital in Tiffin, Ohio on December 31, 1930 to Harry Benjamin Dobrow and Florence Bein Dobrow. She started school in Tiffin, but when the family moved to Akron, she attended Portage Path School, then Rankin School and Buchtel High School. She enjoyed success in academics and was a member of the Junior Classical League, graduating second in her class at Buchtel. At Bryn Mawr College, she finished Magna Cum Laude with a major in Chemistry. Next stop was Radcliffe for graduate school, connected to Harvard, where she found the love of her life, Ed. June 20, 2020 would have marked their 66th wedding anniversary if Ed had lived 9 more days. Ed always said Sherry was the better chemist, but she took on the challenging unpaid job of motherhood after they both earned Master’s Degrees. She returned to Ohio when Ed took a position at The Ohio State University, in Columbus. After Ed started working at Battelle Memorial Institute, they built their first home. Later, she and Ed built their dream house in Worthington, working closely with the builder and designer. She reluctantly left Ohio, moving to North Carolina in 2008. Their final home in Fairview was well suited for them and was near their daughter’s family and Ed’s sister. Always an avid reader, she joined a Great Books Club, and volunteered at the Cranbrook School library. She never stopped learning, taking classes at OSU in art history and economics for fun. She was able to visit museums in Europe to see some of the artwork in person while Ed was traveling for work. During World War II, her school taught boys and girls how to knit, and they produced warm socks for the soldiers overseas. She liked knitting, especially hats, mittens, scarves, and most recently a cell phone protector. She passed on the knitting interest to the younger generations, with the funny twist that her grandmother had considered knitting too old-fashioned, so it skipped a generation. A few of her interests included thimbles, paintings of owls (her college mascot) and collectible owls, stamps, and bridge. She enjoyed attending Columbus Symphony Orchestra concerts, and had played the piano for several years in Akron. She is survived by two children, Edward Louis Lipinsky (May) of San Jose CA and Sarah Lipinsky Manow (Stan) of Asheville. Other survivors include grandchildren, Israel Lipinsky, Michelle Manow, and Melissa Manow; step-granddaughters, Karen, Kim, and Sabrina, great-granddaughters, Riann Francis and Ryleigh Ellis, and step-great-grandson, Alex; her brother, Richard Dobrow, MD, nieces, Rachel Dobrow Stone (Scott), and Shasa Dobrow and their families. A private graveside service was held with the assistance of Morris Funeral Home. Memorials may be sent to the family through the website at www.morrisfamilycare.com.

Sherry Lipinsky passed away peacefully at home September 11, 2020 following a long decline in health. She was born at Mercy Hospital in Tiffin, Ohio on December 31, 1930 to Harry Benjamin Dobrow and Florence Bein Dobrow. She started school... View Obituary & Service Information

The family of Sherry Lipinsky created this Life Tributes page to make it easy to share your memories.