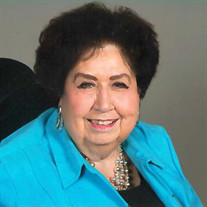 Shirley Jean McDonald, 81, passed away on Sunday, September 16, 2018 at the John F. Keever, Jr. Hospice. Her first job was at KVOO radio station in Tulsa, OK and that was also where she met the love of her life, Robert Owen McDonald. They married and moved to south Arkansas. They lived in El Dorado, AR for 36 years. They opened and ran The Flower Basket where Shirley made arrangements, corsages and learned to decorate homes. She continued to do this for others for the rest of her years. They retired and moved to Asheville, NC in 1996. Since moving to Asheville she became involved in their church and community. She was a member of Central United Methodist Church’s prayer group for 22 years and worked on the bereavement committee for many years as well. Shirley was a member of of the Beta Sigma Phi Sorority for 50 years where she served as President as well as received the Girl of the Year Award on many occasions. When she and Bob moved to The Crossings at Reynolds Mountain she became the head of the New Resident Ambassador Committee. She remained in that position until one month before her passing. Shirley is survived by her husband, Bob McDonald, of Asheville, NC; her son Scott McDonald, his wife Tammie, and their daughters, Megan and Sarah, all of Asheville, NC. She is also survived by her daughter Melinda Lunn, her husband Greg, and their children Parker, Gabrielle and Palmer, of Fayetteville, AR. Also surviving are two siblings, Lee Kannady and Mary Thomas of Tulsa, OK. She was preceeded in death by her parents, Herbert and Lorraine Kannady of Tulsa, OK; and her sister Ruth Grim of Cushing, OK. A Celebration of Life will be held at 11 AM on Saturday, September 22, 2018, at Central United Methodist Church, 27 Church Street, Asheville, NC. In lieu of flowers memorial contributions may be made to the Central United Methodist Church Foundation 27 Church Street, Asheville, NC 28801.

Shirley Jean McDonald, 81, passed away on Sunday, September 16, 2018 at the John F. Keever, Jr. Hospice. Her first job was at KVOO radio station in Tulsa, OK and that was also where she met the love of her life, Robert Owen McDonald. They married... View Obituary & Service Information

The family of Mrs. Shirley Jean McDonald created this Life Tributes page to make it easy to share your memories.

Send flowers to the McDonald family.