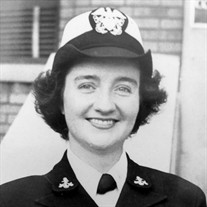 Susan Inscoe Seaton (Hudson) passed away on October 30, 2017 at the Deerfield Episcopal Retirement Community, Asheville, North Carolina. Susan was born and grew up in Nashville, NC, where her father, L. S. Inscoe, was Superintendent of Schools in Nash County. Family life centered around the Scottish Presbyterian Church, education, and most importantly, music. After graduation from Flora MacDonald College, Susan taught high school English at a Presbyterian boarding school in Glade Valley NC, later enlisting as a WAVE in the Navy at the beginning of World War II. She was a Lieutenant J.G. when she met John Seaton, Colin Hudson, and Martha Hudson at the youth group in the Church of the Pilgrims in Washington, DC. Both John and Colin were physicists in the war effort - John in the Army and Colin in the Navy. John Seaton married Susan in 1946, settled in Silver Spring, MD, and raised five children. John, a violinist, and Susan, a pianist, encouraged all of their children to play stringed instruments, enjoying many family quartets and ensembles together. John Seaton passed away in 1994 in Los Alamos, New Mexico. Susan Seaton later moved to Seattle, WA, and then to Asheville in 2009 to marry her and John’s wartime friend, Colonel Colin Hudson. Colin passed away in 2015. Susan is survived by her son, Bob Seaton of Tallahassee, FL; Nancy Tuncil (George) of Maple Valley, WA; Beth Davis (Jerry) of Ithaca, NY; Sue White (Jim) of La Conner, WA; and Ann Witzig (John) of Rowley, MA, in addition to eleven grandchildren and four great grandchildren. A Memorial Service will be held on Friday, November 3, at 2 pm in the Health Care Chapel, Haden Hall, 29 HighBridge Crossing, Deerfield Episcopal Retirement Community. A reception will be held in the Activity Room adjacent to the Chapel concluding the service. If you wish to make a memorial donation to a charity in her name, these are three organizations she supported: Doctors Without Borders, American Red Cross, and Catholic Relief Services. Morris Funeral Home, 304 Merrimon Ave., is assisting the family. Condolences may be sent to the family through the website, www.morrisfamilyfuneralhome.com

Susan Inscoe Seaton (Hudson) passed away on October 30, 2017 at the Deerfield Episcopal Retirement Community, Asheville, North Carolina. Susan was born and grew up in Nashville, NC, where her father, L. S. Inscoe, was Superintendent of Schools... View Obituary & Service Information

The family of Mrs. Susan Inscoe Seaton created this Life Tributes page to make it easy to share your memories.

Send flowers to the Seaton family.