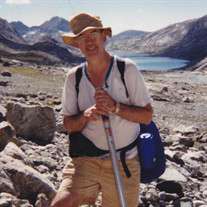 If you knew my father you would know that no words could adequately describe his gentle intelligence, his brilliant scientific mind, or his calm demeanor. Dad was completely dedicated to being the best doctor possible. He would study every night. Besides working hard, Dad also knew how to play hard. We went on countless backpacking trips, hikes, adventures abroad, and even took a canoe trip to the Everglades. He was a genius at showing up at the right time, dashing into the theatre to catch my sister’s part of the ballet or fixing his patient brown eyes in approval when I scored a soccer goal. My parents were also always the first on the dance floor in his never ending quest to keep a dance from the 60’s called the “shotgun” alive. He lived a life of such integrity that we were never ashamed to call him father. Thomas Lynch Murphy, Jr. was born in Boston, Massachusetts on May 3rd, 1947. His family eventually settled in Salisbury, NC. After graduating Boydon High School, he attended Chapel Hill as a Morehead Scholar. It was there he met his wife Nancy Pierce Clark. He then went on to attend Harvard Medical School, residency at the Cleveland Clinic, and taught as a professor at the University of Oklahoma. It was that point that his twin children were born and the family decided to move back to North Carolina to Gastonia, where he practiced Internal Medicine for more than 30 years. Dr. Murphy is survived by his wife, Nan Murphy of Asheville, NC. His sister Katharine Rawling of Phoenix, AZ. His brother Charlie Murphy of Tallahassee, FL. His daughter Dargan Gilmore and her husband Will Gilmore of Raleigh, NC and their three children, William, Téa, and Pierce. His son Thomas Murphy, his wife Amanda Murphy, and their three children Tav, Charlie, and Eloise of Asheville, NC. A lot more could be said about his accomplishments, faith, and generosity but my dad was also thrifty and would be counting every word. A service of remembrance will be held at St. Marks, Gastonia at 3 pm on Sunday, July 16th. In lieu of flowers, please make a donation in his honor to St. Marks, Gastonia, All Souls Cathedral of Asheville or Mountain True of Asheville.

If you knew my father you would know that no words could adequately describe his gentle intelligence, his brilliant scientific mind, or his calm demeanor. Dad was completely dedicated to being the best doctor possible. He would study every night. Besides... View Obituary & Service Information

The family of Dr. Thomas Lynch Murphy Jr. created this Life Tributes page to make it easy to share your memories.

If you knew my father you would know that no words could adequately...