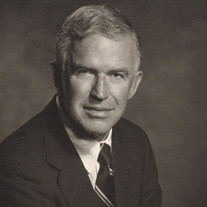 Tracy Walker McFarlan died peacefully at Givens Health Center on Wednesday, November 29, 2017. Born on January 7, 1923 in Brooklyn, NY, his parents Edward McFarlan and Marjorie Walker McFarlan raised Tracy and his brother Edward in Greenwich, CT. It was there that he developed his love for the outdoors, skating on local ponds, exploring the woods, and playing sports with friends and family. Brunswick School, where he was a student K-12, was the “centerpiece of his life.” He loved athletics and made friends for life, and, he would say, “They taught me the importance of connecting with others and of not giving up even when I wanted to quit.” In 1941, he entered Williams College and joined the Psi Upsilon fraternity. Two years in, he joined the US Army Reserves and served from 1942 until 1946 where he was assigned to a weather facility in China and helped forecast weather for the invasion of Japan. Tracy married Katharine Pomeroy Oakes on June 10, 1949 at St. Bartholomew Chapel in New York City. They raised three children – Susan, John and Lynn. Early family life was spent in Paoli, PA and Weston CT. In 1961 they moved to Glencoe, Illinois where they lived for 18 years. Taking advantage of the Midwest location, Tracy took his family canoeing in the Boundary Waters, skiing in the Rockies, and hiking/camping in various national parks. Committed to St. Elizabeths Episcopal Church, Tracy sang in the choir and served on many boards. After the war, Tracy completed his training in mechanical engineering at Bridgeport Engineering Institute. He started his career at Sperry Products, a company that pioneered the use of ultrasound to develop non-destructive testing equipment. After 12 years with Sperry, he joined Magnaflux in Chicago, where he worked for 18 years in ultrasound product management. As retirement approached, Tracy, pursuing a life-long passion, took photography classes. Perfecting his skills, he and Kay moved to Asheville, NC in 1978, where he began his “working retirement” as a photographer and lived for 38 years. He was a very active member in the Asheville community, volunteering for Trinity Church, Habitat for Humanity, Meals on Wheels, the local homeless shelter and serving on numerous community projects and boards. Kay and Tracy moved into Givens Estates, an Asheville retirement community, in 2005. Kay died in February of 2007. Devoted companions for 58 years, they built a rich, full, and adventurous life together filled with family and friends. Tracy married Sara Grubbs McWhorter in Asheville’s Trinity Episcopal Church in November 2010. For more than 7 years, Tracy and Sara shared a deep bond of friendship, humor and love of life with a wide community of friends. Tracy’s family and friends will remember him as a devoted husband, friend and family man. With a lion’s spirit who never gave up, he was deeply committed to living out Brunswick School’s motto of “Courage, Honor, and Truth.” A natural leader and conversationalist with an endearing sense of humor, you could find Tracy leading hikes for the Carolina Mountain Club, delivering speeches for Asheville’s Pen and Plate Club, engaged in lively conversation, or playing bridge and golf with friends. Not one to fritter time, he dove into projects, such as building model planes and boats, doing genealogical research, and avidly studying the gyrations of the stock market. He loved people and everyone enjoyed being with him. Sustained by his love for family and treasured friends, some would say, “He was a character who lit up any room with his humor and his kind, generous and loving personality.” He is survived by his wife, Sara Grubbs McWhorter, three children and their spouses: Susan McFarlan and husband James Rooney; John McFarlan and wife Jan McFarlan; and Lynn McFarlan-Randall and husband Christopher Randall. He is also survived by five grandchildren: Katharine and Theodore Rooney, Rebecca and Emma Randall, and Tracy McFarlan. In addition, he is survived by two stepchildren: Fred and Beth McWhorter. A memorial service will be held on Saturday, January 6 at Trinity Church in Asheville, NC at 12:00 p.m. There will be a reception following the service at the church. In lieu of flowers, memorial contributions may be made to Meals on Wheels, Asheville, 146 Victory Road, Asheville, NC 28801; or Habitat for Humanity, 31 Meadow Road, Asheville, NC 28803.

The family of Mr. Tracy Walker McFarlan created this Life Tributes page to make it easy to share your memories.

Send flowers to the McFarlan family.