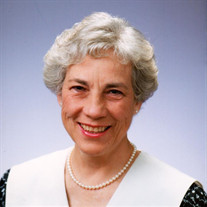 Virginia Ada Deter, daughter of Ezra and Edith Deter passed into Heaven peacefully, November 15, 2015, 10 PM, in her sleep with her sister, Dee Miller holding her hand. Virginia was born in Chicago, IL March 2, 1925. Virginia spent over 42 years in missionary service in Kanazawa, Japan as a Presbyterian missionary. Virginia taught several years in high school in the US then 42 years in Hokuriku Gakuin Jr. College, and was granted Professor status, later appointed acting President, and later a board member of the college. Virginia received her B.A. at Wheaton College, Wheaton, IL, her M.A. Northwestern University, Evanston, IL, Japanese Language study at Yale’s Institute of Far Eastern languages Virginia was commissioned as a Presbyterian Missionary in 1946. Virginia taught English as a foreign language, English Bible and Christian education lecturing in Japanese after her arrival in Japan in 1950. Virginia sponsored a gospel team of student’s and former students throughout Japan. She loved her students and they loved her. Her passion was to bring the good news of Jesus Christ to all she came in contact. Virginia authored various books in Japanese and co-authored others in Japanese and English. Many awards were presented to Virginia, she received the Distinguished Alumni award from Wheaton College, Certificates of Appreciation from the Mayor of Kanazawa City, the Governor of Ishikawa Prefecture in the 133 year of Hokuriku Gakuin College. Virginia is only the 8th person to receive the title of Professor Emeritus. The United Church of Christ in Japan, the Synod, the Presbytery and the General Assembly of the Presbyterian Church U.S.A. also recognized Virginia with numerous awards. Before retiring from Japan, Virginia received from the Emperor of Japan an award normally only given to heads of states in recognition of her teaching Japanese women for over 40 years. Virginia retired to Givens Estates, a Methodist Retirement Community in Asheville, NC in 1992. Virginia has been a blessing to her family that includes, Dee Miller, her sister and brother-in-law, Jerry A. Miller of Asheville. Virginia has one nephew, Dr. and Mrs. Jerry A. Miller, Jr. of Augusta, GA and one niece, Becky Sandberg and her husband, Roger, of Wheaton, IL; eight married great nephews and nieces and 26 great-great nephews & nieces living all around the world, some as missionaries. All were impacted by Virginia. Virginia is a member of Christ Community Church of Montreat. Until the past few years, due to failing health, Virginia had been active in her church especially her ladies circle, leading a Bible study for Japanese ladies in our community, taking classes at UNCA for seniors, playing Marjon, traveling and volunteering at the Billy Graham Training Center at The Cove. Virginia will be greatly missed because of her impact on so many for God’s Kingdom, but we know she is in the presence of our loving God, who she served so faithfully in Japan and in the U. S. all her life. All who knew her, loved her. A memorial service will be held December 5, 2015 at Gaither Chapel, Montreat NC at 2:00 PM with reception to follow. Her pastor, The Reverend Richard White will be conducting the service.

The family of Virginia Ada Deter created this Life Tributes page to make it easy to share your memories.

Send flowers to the Deter family.