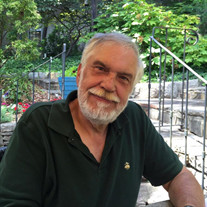 W. Richard Janikowski, beloved husband of Phyllis Betts, died unexpectedly at their home in Gap Creek, outside Asheville, NC, on March 8, 2021. Phyllis found him unresponsive in his reading chair, after he had worked outside on a warm spring... View Obituary & Service Information

The family of Waclaw Richard Janikowski created this Life Tributes page to make it easy to share your memories.