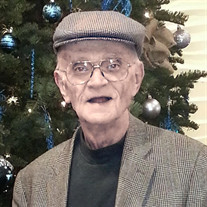 Allen Gustav Dries, 83, of Asheville, passed away on November 29, 2019. Allen was born and raised in Hoyleton, Illinois, the youngest of 6 children. He was baptized November 22, 1936 and confirmed on April 2, 1950 at Trinity Lutheran Church in Hoyleton, Illinois. He graduated from Nashville High School in 1954 in Nashville, Illinois. He served in the U.S. Army Reserves for 6 years, where he did his basic training at Fort Leonard Wood. He was a payroll administrator for the reserves unit, but he loved telling his children stories about driving trucks and tanks for the Army and bivouacking with his platoon. Following his service, he completed his studies at the University of Illinois, receiving a Master of Arts Degree in Labor and Industrial Relations. He then worked for the University of Illinois for more than 30 years where for many years he led the Human Resources function for the university’s library system. After retiring he and his wife Beverly (née Lueking) moved to Asheville, where after remodeling their home Allen decided he was bored. As a life-long blood donor, he first volunteered and then worked full-time for the American Red Cross location near his home as the front desk receptionist and counselor. He retired a second time after 13 years of service to the Red Cross. Allen loved working outside in the garden and taking care of many pets over his lifetime. His menagerie included cats, a dog, a rabbit, birds, a chinchilla, tropical fish and koi. He liked baking angel food cakes from scratch and creating ad hoc bran muffin recipes using the last bits of cereal in the cupboard. His secret celebrity crush was Julia Ormond and he loved the movies “First Knight” and “Legends of the Fall”. Later in life, he loved playing along with TV gameshows on the Gameshow Network. Allen and Beverly were members of Emmanuel Lutheran Church in west Asheville. He was preceded in death by his wife Beverly and four siblings. He leaves behind a sister Marlene (Norman) Kahre of Hoyleton, Illinois; daughter Anne Dries of Chattahoochee Hills, Georgia; son John Dries of Nashville, Tennessee and many nieces and nephews. A celebration of Allen’s life will be held on Saturday, December 7, 2019 at Morris Funeral Home, 304 Merrimon Avenue, Asheville where visitation will be held at 10:00 AM with memorial services immediately following at 11:00 AM and internment at Riverside Cemetery, Asheville. In lieu of flowers, the family asks that a tribute contribution be made in Allen’s name to the Asheville Humane Society.

Allen Gustav Dries, 83, of Asheville, passed away on November 29, 2019. Allen was born and raised in Hoyleton, Illinois, the youngest of 6 children. He was baptized November 22, 1936 and confirmed on April 2, 1950 at Trinity Lutheran Church... View Obituary & Service Information

The family of Allen Gustav Dries created this Life Tributes page to make it easy to share your memories.

Allen Gustav Dries, 83, of Asheville, passed away on November...

Send flowers to the Dries family.