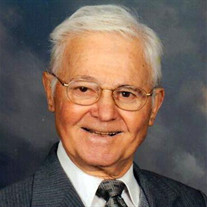 Evangelos Athanasios Papadopoulos, 96, died on Saturday October 31, 2015 at this home. His wife Mary Vlahos Pappas was by his side. Angelo was born in Fidakia Evrytania, Greece on November 12, 1919 to the late Athanasios and Maria Kaltsunis Papadopoulos. He is also preceded in death by two brothers, three sisters and his granddaughter, Katy Anne. Angelo migrated to America in 1938 where he worked in New York. He worked his way to Williamson, WV and Columbia, SC until he finally settled in Asheville in 1954 where he opened Grace Restaurant in North Asheville. In 1955 he married his loving and devoted wife Mary Vlahos. Together they opened Land O’Sky Restaurant in Biltmore and ran the business for 20 years. He is survived by his wife Mary, three children, Arthur (Laurie), Litsa (Ted), Penny (Steve) and his grandchildren, Helene (Ken), Dean, Evan, Maria, Sara, Stephanie and Davis, as well as two great grandchildren, Cameron and Connor. Angelo was a loving and dedicated husband, father, Papou (grandfather) and friend to all that knew him. He served on many boards and was a faithful member of his church and is the current recipient of the Archangel Michael Award. A Trisagion will be held on Monday November 2, 2015 at 7:00pm at Holy Trinity Greek Orthodox Church with Father Michael Diavatis officiating. The family will receive friends starting at 6:00pm. A funeral service will be held on Tuesday November 3, 2015 at 11:00am at the church with Father Tom Pistolis officiating. Burial will follow at Riverside Cemetery. In lieu of flowers, donations may be made to the Holy Trinity Greek Orthodox Church General Fund, 227 Cumberland Ave., Asheville, NC 28801.

Evangelos Athanasios Papadopoulos, 96, died on Saturday October 31, 2015 at this home. His wife Mary Vlahos Pappas was by his side. Angelo was born in Fidakia Evrytania, Greece on November 12, 1919 to the late Athanasios and Maria Kaltsunis... View Obituary & Service Information

The family of Mr. Angelo Pappas created this Life Tributes page to make it easy to share your memories.

Send flowers to the Pappas family.