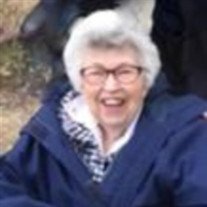 Barbara (Bobbie) Jean Cranford Payne, 88 years of age, passed peacefully from this life, and according to her late father’s words, she was promoted to her heavenly home on January 1, 2021 at Givens Estates Care Center. Bobbie was born in High Point, NC, and married Charles (Charlie) William Payne and they were residents of Asheville, NC for 56 years. She was employed as a Medical Assistant with Asheville Pediatrics until her retirement. Bobbie is most remembered as a bright star here on earth, bringing joy to everyone she met. She taught us all how to love others and to practice the golden rule. Bobbie was the eldest daughter of Charles Colon Cranford and Bruce Gallimore Cranford. Bobbie was pre-deceased by her parents and husband, Charles, and her brother, Charles Jr. Bobbie and Charlie are survived by a son, Michael Bruce (wife - Elaine) and 2 daughters, Andrea (Andi) Kdan, and Jami Lewis (the late Jim Lewis). She is also survived by 6 grandchildren, Bradley, Lauren, Ben, James, Jason, and Shannon and 8 great grandchildren. Bobbie was a member of Central United Methodist of Asheville, NC and was active in her church’s circle group. She was instrumental in developing and designing the Remembrance Garden at Central United Methodist Church. Due to the current COVID-19 restriction a memorial service will be held at a later date. A special thanks goes to the staff at Givens Estates Care Center and to Dr. Gloria Trujillo. Memorials may be made to Central United Methodist Church, 27 Church, Asheville, NC, 28801 or the Givens Estates Care Center, 2360 Sweeten Creek Road, Asheville, NC 28803.

Barbara (Bobbie) Jean Cranford Payne, 88 years of age, passed peacefully from this life, and according to her late father&#8217;s words, she was promoted to her heavenly home on January 1, 2021 at Givens Estates Care Center. Bobbie was born... View Obituary & Service Information

The family of Barbara "Bobbie" Payne created this Life Tributes page to make it easy to share your memories.

Send flowers to the Payne family.