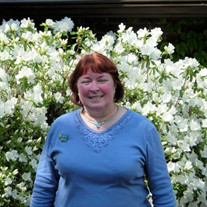 Benn Edney Fass, Jr., passed away unexpectedly on Thursday, February 25, 2021. Benn was a longtime Asheville resident, and came from a long line of Western North Carolina luminaries. Though she was born in Jacksonville, FL, she always considered Asheville home. Born to Benn Edney Fass, Sr, and her then-husband William J. Fass, Benn Jr. displayed a sharp mind and quick wit from an early age. She was always proud that her father was the one who brought Kentucky Fried Chicken to Asheville. Benn attended St. Genevieve’s School here in Asheville (Now Carolina Day School), then advanced to Chatham Hall in Chatham, Virginia. After graduation, Benn followed the family interest in the hospitality industry, attending Cornell University, School of Hotel Administration, graduating with a degree in Hotel and Restaurant Management. Her love of hospitality and restaurant design led her to work all over the country, including working for Washington, DC’s Cini-Grissom, designing industrial kitchens, including some as far away as Saudi Arabia. When she returned to Asheville to live and work, she joined the NC Democratic Party and was very active in the local political scene. She held a variety of offices in the local district, and became an expert in writing successful grants to support women’s charities all over Buncombe County. While she worked for First Realty, and in so doing became an honorary member of the Mackenzie family, she also joined Women Mean Business. In 1987, she and her late mother opened Mailboxes Etc. on Merrimon Avenue, bringing the franchise to Western NC. Mailboxes on Merrimon was a fixture for nearly a decade and many people came to know the sprightly Mrs. Benn and her red-headed daughter, Benn, Jr., and Benn’s dedicated partner, John Pickering, as they grew the Mailboxes brand. After Mailboxes closed, Benn Jr. continued to consult with other Mailboxes franchises, and to manage family properties. Her property management and political activism continued to her untimely passing. In 1985, Benn, Jr. met an Asheville transplant, John T. Pickering. For the next 35 years, Benn and John created an enviably strong relationship. While they never married, John and Benn were engaged for the last 15 years, a state that suited them both. Their deep devotion was always evident. In John’s family, Benn found sisters and a brother she’d never had. Her passing will leave a Benn-shaped hole of grief in both the Pickering & Adams families. Her extended family of the heart, the entire Robert Rabbino family – especially William and Julie Rabbino and their son Hart Rabbino of Asheville, NC - feel that deep grief as well and will miss Benn’s bright smile and wicked laugh. Benn was a popular, loving and loyal friend, and she continued to keep up with friends from childhood, St. Genevieve’s, Chatham Hall and Cornell. She was an immensely generous woman who was always there with a helping hand for those in need. She supported Meals on Wheels, Manna Food Bank, and Asheville Community Foundation, just to name a few of her particular favorites. She and John also supported children’s charities around the globe, with a particular focus on First Nation’s Peoples. Preceding Benn Jr., in death are her parents, Benn Edney Fass, Sr. And William J. Fass. Grieving her are her partner, John T. Pickering, and his family, including Ralph and Jeanne Pickering Adams and their sons Cooper F. and Quinnton D. Adams; David C. Pickering and his children Michael J. and Lauren N. Pickering; and the full and extended Robert Rabbino family. Her close circle of dear friends of 30-plus years will also grieve her passing, as Benn was like family to them as well. In addition, legions of former Mailboxes friends, charity and political friends and former colleagues will miss her active, brilliant presence. Given the current conditions, there won’t be a service at this time, however the family is hoping to have a celebration of Benn Jr.’s life in mid- summer when her ashes will be interred at Calvary Episcopal Church, Fletcher, NC, next to her mother. In lieu of flowers, please contribute to Manna Food Bank in Benn’s memory to assist others in need - www.MannaFoodBank.org and click Designate My Donation, then enter Benn E. Fass, Jr. The Person to Notify is Jeanne Adams, [email protected] or John T. Pickering at home. If you prefer to mail donations to Manna Food Bank: 627 Swannanoa River Road, Asheville, NC 28805-2445 (Please include a note saying who is being honored and whom to notify.)

Benn Edney Fass, Jr., passed away unexpectedly on Thursday, February 25, 2021. Benn was a longtime Asheville resident, and came from a long line of Western North Carolina luminaries. Though she was born in Jacksonville, FL, she always considered... View Obituary & Service Information

Send flowers to the Fass family.