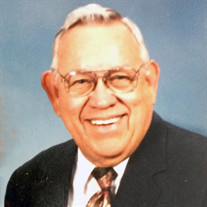 Charles Thomas Bassett, age 92, passed away peacefully on Thursday December 22, 2016. A lifelong resident of Buncombe County, Mr. Bassett received his education from Grace High School and Asheville-Biltmore College where he earned a degree in business. He was working at J.B. May Market in 1941 when Pearl Harbor was attacked. By May of 1942, he was serving in the United States Marine Corps in the South Pacific as an airplane armorer and aviation ordinance specialist. Upon returning, he married the love of his life, Jean Grisette. Together they shared 71 years of marriage. Charles spent the early part of his career at the Smoky Mountain Hatching Egg Service in Fairview. He was an integral part in the development of the Fairview Volunteer Fire Department, where he served as Assistant Chief and on the Board of Directors. Charles spent the latter part of his career at Finkelstein’s, Inc. where he had the privilege of working alongside his brother June and his son-in-law Joel. Together they have had the honor of serving the people of western North Carolina and beyond. He was a 32nd degree Mason and a longtime member of First Presbyterian Church of Asheville, where he served as a Sunday school teacher, deacon, and elder. Always a Marine, Mr. Bassett was instrumental in the development of the Western North Carolina Veterans Memorial, located in the heart of downtown Asheville. He is preceded in death by his parents, Henry Grant and Rosa Bassett; his brothers, H.G. “June” Bassett and Robert “Bob” Bassett. Charles is survived by his wife, Jean; daughters, Carol McManus (Paul) of Port Orchard, WA, Cathy Piercy (Cliff), of Colorado Springs, CO, and Laura Parker (Joel) of Asheville, NC; and a sister, Mary Rose Davis. He is also survived by his grandchildren: Karen (Sven), Eric, David (Lisa), Chris (Shane), Drew (Rachel), and Cameron; great grandchildren: Colin, Claire, Erik, Thomas (Alexandra), Amanda, Sarah, Jaziah, and Nathan; great great grandchildren: Thomas, Benjamin, and Erik Jr.; and many nieces and nephews. A Celebration of Life will be held on Thursday December 29, at 11:00 AM in the Campbell Memorial Chapel of First Presbyterian Church of Asheville, 40 Church Street. Services will be conducted by his grandson, Drew, and the Rev. Dr. Patrick Johnson. The family will receive friends immediately after the service. Memorials may be made to Fairview Fire Department or First Presbyterian Church. Thank you to all the healthcare professionals who have helped take care of our daddy. Semper Fi. Morris Funeral Home, 304 Merrimon Ave., is assisting the family.

The family of Mr. Charles Thomas Bassett created this Life Tributes page to make it easy to share your memories.

Send flowers to the Bassett family.