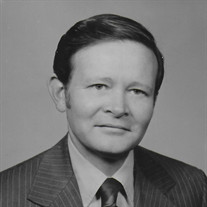 Charles Gaston Lee, III, age 94, died peacefully in his sleep on March 30, 2021. The son of Charles G. Lee, Jr., and Kathryn Marie Matthews Lee, Charles was born on December 19, 1926, in Asheville and remained a life-long resident. After graduating from Lee Edwards High School, Charles attended the Citadel in Charleston, SC, and graduated with a Bachelor of Arts degree. At the Citadel, he developed his skill and passion for playing the trumpet and performed in the dance orchestra. Near the end of WWII, after a stint in the Merchant Marines, Charles served in the U.S. Army Signal Corps in Honolulu, HI, teaching mathematics to soldiers operating radar and repairing electronics. He spoke fondly of this assignment throughout his life. After the war, Charles enrolled in law school at Wake Forest University. He graduated in 1951, and returned to Asheville to practice law. On February 21, 1954, he married Ann Marsh Parker, also an Asheville native. They remained married until her death in 2012. Charles and Ann raised four daughters: Martha Cowan (Roger), Margaret Lee (Jim Dillon), Celeste Hubbard (Dean), and Kathryn Springer (Erik). In addition to his daughters, Charles is survived by his younger brother, Pope Matthews Lee (Susan) of Garner, NC, 13 grandchildren, and nine great-grandchildren. Charles maintained his license to practice law in North Carolina until he was 91. During his long career, he served as regional attorney for General Motors Acceptance Corporation and counsel to Asheville Federal Savings and Loan Association (later renamed Asheville Savings Bank). He performed title work for loans, oversaw estates, drafted wills, and litigated civil cases. For nearly three decades, Charles was a board member of the Asheville Federal Savings and Loan Association and served as chair of the board of directors from 1986 to 1996. Throughout his life, Charles volunteered to lead civic associations. He genuinely enjoyed the intricacies and challenges of running meetings and directing projects, even for condo associations. He had a number of hobbies—studying Southern history, scouring used bookstores for rare books about North Carolina, and tracking down facts about his ancestors in cemeteries and genealogical records. But about no hobby was he more passionate than boating. With maps on deck, he navigated area lakes and parts of the IntraCoastal Waterway, and he loved socializing with other boating enthusiasts dockside. He served as commodore of the Circle Bay Yacht Club in Stuart, FL, and as a member of the Coast Guard Auxiliary. For more than six decades, Charles was a member of the Biltmore Forest Country Club, where, until two years ago, he played golf on Fridays with a group of friends. He was also a life-long member of Central United Methodist Church. To the end, Charles retained his friendly manner, his love for his family, and his affection for dogs. The family would like to thank the thoughtful caregivers who looked after him during the last year and a half at home and at the Givens Estates Health Center. Due to the pandemic, Charles was celebrated by his immediate family at a graveside service at Calvary Episcopal Church in Fletcher. In lieu of flowers, donations may be made to Pisgah Legal Services, 62 Charlotte St., Asheville, NC 28801. www.pisgahlegal.org.

The family of Charles Gaston Lee III created this Life Tributes page to make it easy to share your memories.

Send flowers to the Lee family.